Saturday, May 19th kicked off the 2018 Lucas Oil Pro Motocross Championship Series with the Hangtown Motocross Classic. The start of the Pro Motocross season is synonymous with the kick off of summer – time for BBQs, cold beer, and of course a return to “The Great Outdoors”. Touted as the place for “real racing”, the Lucas Oil Pro Motocross Championship Series takes us back to the heart of off-road dirt bike racing and provides fans with unparalleled access to the action, heart pounding competition, and intensity that can only be found in an outdoor National.

Each week, join us here on Freestyle Photocross as we take a look into the five most memorable moments of each round of the Lucas Oil Pro Motocross Championship Series.

Justin Cooper, of Monster Energy Yamalube Star Yamaha Racing, is kicking off his first full Pro Motocross season after making his pro debut at Unadilla in 2017. Plenty of buzz has been building for the #62 since his pro debut last year, but unfortunately that got put on hold during the 2018 Monster Energy Supercross season when Cooper suffered a season ending injury during only Round 2 of the series in Houston. Now that he is healthy, Cooper finally has the chance to really put all of his hard work to the test. The moment the gate dropped on the 2018 Pro Motocross season, Cooper didn’t waste any time in showing that he’s going to be a force to be reckoned with this season.

During the first moto, Cooper edged passed Jeremy Martin and launched himself into the lead early in the first lap. We already know that this year’s 250 class is jam packed with talent and speed, so for Justin Cooper to immediately find himself upfront is incredibly impressive. The rookie would maintain the lead for the first four laps of Moto 1 before getting shuffled back into 5th place. Cooper would finish the day 5-9 for an overall finishing position of 5th place. The #62 is definitely on track to be one of the next rising stars in the 250 class. 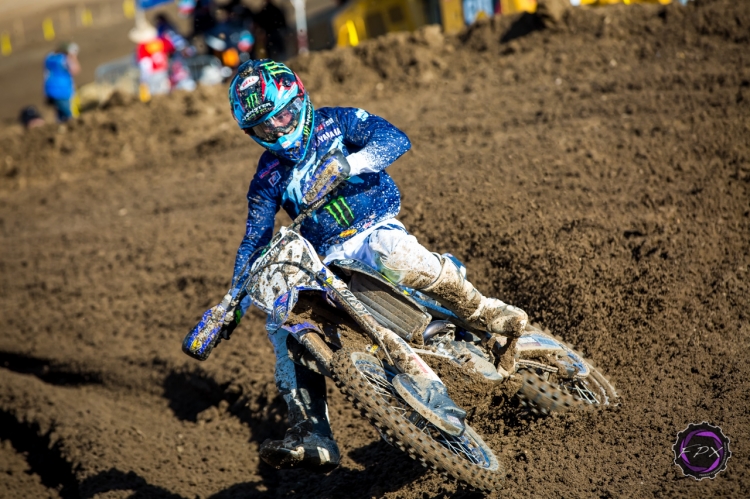 2018 marks the first season since 2016 where both the 450 Class and 250 Class have defending champions present on the starting gate. As with any former or current champion, there is a certain added pressure when you’re starting the season with a target on your back. Last year, the playing field was left as wide open as the throttles and left riders with a completely clean slate as far as speculation for who might emerge at the end of the season as a champion. This season, however, with Zach Osborne donning the Number 1 Plate the 250 Class and Eli Tomac in the 450 Class, these two incredibly fast riders will also have to grapple with the added pressure of being the defending champion in their respective classes.

But it certainly didn’t’ take long for these champions to settle into their roles. Although battles were fierce amongst the competition in both classes, Osborne and Tomac proved that wearing that #1 target on their backs was nothing to fear, unless you were lined up next to them. Osborne used the 30-minute plus 2 lap motos to his advantage as he carefully made calculated passes from his 4th place start all the way to his 1st place finish. The extended time on the track also proved to beneficial for Tomac as he had to navigate his way through the pack from 5th place in the first Moto and as far back as 10th place in the second Moto. Luckily for Tomac (and unluckily for his competition), he remains to be the undisputed fastest rider in the field, logging lap times at least three seconds faster than the rest of the 450 riders on the line. Both Zach Osborne and Eli Tomac kicked off the season with impressive 1-1 finishes and will continue to hold the Red Plates as we head south to Glen Helen Raceway for Round 2. 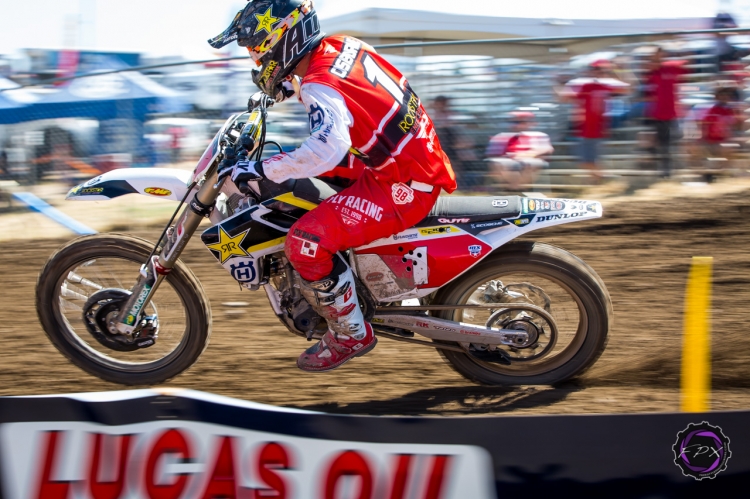 There is no denying that the sound of a two smoker hits motocross enthusiasts right in the feels and allows them to reminisce about the “good ol days”. While we still get the occasional guy on the line riding a 2-stroke in the pro class, most notably Gared “Stank Dog” Steinke who has made a household name for himself, their presence as a full gate of riders had all but faded into the history books until the last couple of years. However, MX Sports found the perfect way to tug at the heartstrings of motocross purists with the introduction of the 125 All Star Series at seven Pro Motocross Nationals for 2018. When MX Sports first announced the return of 2-stroke racing to the National circuit, the entire moto industry was certainly a buzz – pun intended.

At Hangtown, not only did fans have the opportunity to watch the best of the best battle it out, they also had the opportunity to witness the inaugural 125 All Star Series race and WOW! What a lineup! Riders like multi-time champion Ryan Villopoto, former champion and now Team Manager Wil Hahn, fan favorite Jimmy Albertson, and plenty of local hometown heroes, including 16-year old Aiden Tijero were ready to let those yellow jackets sing the moment the gate dropped. If you’ve paid attention to the amateur scene in the past couple years, you’ve certainly heard of Orange Brigade rider Aiden Tijero. Tijero has been steadily racking up the wins in his amateur races, especially on his 125 two-stroke, and now he would be lining up with former pro champions.

Tijero launched his KTM to the front of the pack and never looked back, passing riders like Wil Hahn and even Ryan Villopoto for the lead. What a moment for the young amateur rider! I can only imagine what it must be like to be an amateur rider and beat one of the most legendary riders of his childhood. Tijero is certainly going to be one to watch in the coming years as he makes the transition from B-Rider, to A, to the Pro Class, but a win in the 125 All Star Race is certainly a great place to start. 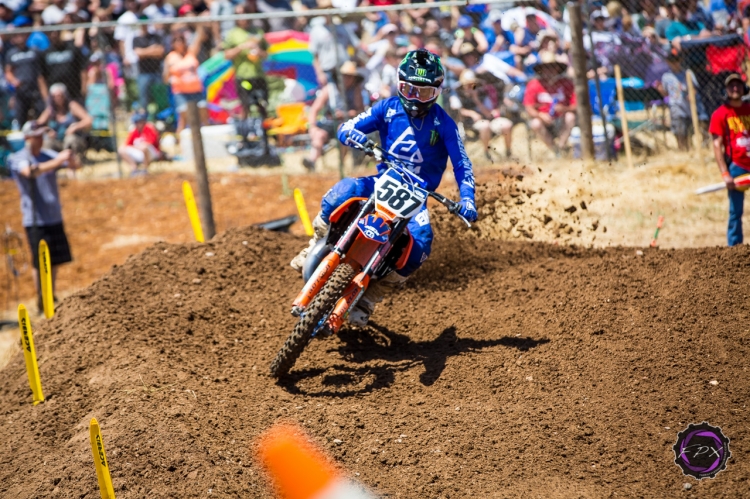 Ken Roczen is undoubtedly one of the fan favorites in the pits. His determination and dedication to racing, as well as his charismatic disposition with the fans makes Ken Roczen an easy guy to root for. Hangtown marked the first Pro Motocross National the German lined up for since Ironman 2016. After his near career-ending left arm injury during Round 3 of Monster Energy Supercross in 2017 and then a secondary injury blow to his right arm during Round 6 of Monster Energy Supercross in 2018, many speculated that Ken Roczen would never return to the glory and speed the former champion once held. But one thing is for certain; there is probably no rider that is as mentally tough as the #94. Hit by hit, Roczen was determined to come back stronger than ever. He may have lost a few battles, but he’s ready to win the war.

Fans were incredibly excited to see the former champion return to the starting gate and it’s true that absence makes the heart grow fonder. As the hillsides cheered for the #94, Kenny put on an impressive showing for his first return back to Pro Motocross. He would finish 6-16 for 11th overall. This may not be his ideal result, but we can bet that Roczen will only get better and stronger as the season marches on. Sure is great to have Kenny back on the line as a contender!

Not only did Hangtown kick off the 2018 Pro Motocross season, but it was also a momentous outing for the motocross classic as it celebrated its 50th anniversary. Hangtown may now be a household name, but much of that has to do with the incredible work done by the Dirt Diggers North Motorcycle Club. In fact, the Hangtown Motocross Classic even predates the Lucas Oil AMA Pro Motocross Championship, but it was always the dream of the founding members of the Dirt Diggers North Motorcycle club to help put together a National racing series.

The event moved from the quiet hills of Placerville, which was known in the Gold Rush days as “Hangtown” and where the beloved race first acquired it’s name, and since 1979 has been held at its current home at the Prairie City OHV Park in Rancho Cordova, CA. To this day, Hangtown remains the only event in the series that is still run by a motorcycle club – and, yes that means Hangtown is entirely volunteer planned, run, and promoted.

Hangtown has grown to become synonymous with the kickoff of the Lucas Oil AMA Pro Motocross Championship as well as the catalyst for summer. Now a household name, I couldn’t imagine a Pro Motocross series without this iconic race.

Join us next week as we head to San Bernardino, CA for the GiantRV Glen Helen National for Round 2 of the Lucas Oil AMA Pro Motocross Championship Series.