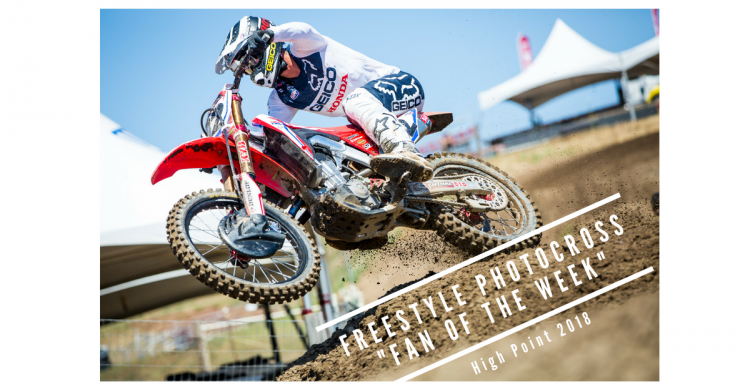 Next up in the Freestyle Photocross “Fan of the Week” Contest is the #32 of Christian Craig. Christian is easily one of the nicest and most positive guys in the pits and probably has the most adored kid in the paddock too. If you don’t already, you should definitely follow his son, Jagger, on Instagram (an account that is definitely run by Jagger and not his awesome mom, Paige ;)).  He’s been fortunate enough to bounce back and forth between his official role with GEICO Honda on the 250 and his fill-in/official role with Team Honda HRC on the 450 to fill in for both Ken Roczen and Cole Seely at one point or another.

The 2018 Lucas Oil Pro Motocross season was off to a great start for the #32 with a couple of Holeshots as well as a Top 10 finish at the season opener at Hangtown. Unfortunately, Christian’s season was prematurely cut short after leading the first Moto at Glen Helen. He crashed while in the lead and knew immediately that he had torn his ACL. Doctor’s confirmed the injury after the race, ending his season as it was just starting to heat up.

Even though we won’t get to see him ride for the rest of the 2018 Pro Motocross season, we know there are still plenty of CC fans out there!! We can also bet that we’re still guaranteed to see plenty of fun Instagram and Vlogging adventures from the whole Craig family as they wait for the arrival of their first daughter in the coming weeks.