For the first time this season, Pro Motocross headed east for Round 4 of the Lucas Oil Pro Motocross Championship Series. The High Point National takes place in Mt. Morris, PA, just outside of the Morgantown, VW MX Sports headquarters. High Point is a special race for a couple of reasons – it is the home race for MX Sports and Racer X Illustrated and it typically takes place on or around Father’s Day weekend. The sweeping hillsides and guaranteed rough and rutted track always makes for an exceptional day of racing at High Point and the fans are easily some of the loudest on the circuit. Even though the injury bug has taken out a handful of riders this season, the racing continues to be thrilling, with new storylines developing every weekend, especially in the insanely competitive 250 class. Here’s a look at five of the most memorable moments from Round 4 of the Lucas Oil Pro Motocross Championship.

Yes, you read that right – over the course of two motos, Blake Baggett managed to pass a total of 47 riders. It’s safe to say that High Point got off to a low start for El Chupacabra. In the first turn of Moto 1, Baggett was involved in a near catastrophic first turn pileup that left what looked like nearly half of the pack in a pile of carnage. By the time every displaced rider found their way back to their own bikes, Baggett was scored in 33rd. Even worse than a bad start for riders, is a start that leaves you on the ground. But El Chupacabra is always making the most of a bad situation. As the battle raged on between Eli Tomac and Marvin Musquin near the front of the pack, Baggett was decidedly clawing his way through the back of the pack. It was to be expected that Baggett would make up some decent ground from his abysmal start, but exactly how much ground even surprised announcers Jason Weigandt and Grant Langston. As they were commentating on the battle for first, all of a sudden we hear Jason Weigandt exclaim, “Baggett has made a pass up to 8th! Baggett is in 8th?” almost in disbelief of the stats even though they were watching them unfold before their very eyes. Before all was said an done, Baggett had moved all the way up to an astounding 5th place as the checkers flew. We know that in moto, absolutely anything is possible and with that ride of a lifetime in the first moto, Blake Baggett had actually set himself up as a potential overall podium contender. High Point continued to throw a wrench into the plan for the #4 with another tough race during Moto 2. Baggett was scored in 27th off the start in Moto 2, but as per usual, kept fighting with a vengeance. Baggett once again passed nearly the entire field of riders in the 450 class and crosses the finish line in 7th for a 7th overall. Even though his starts might be considered the low point of High Point, to pull off a Top-10 finish after passing a combined 47 riders is absolutely impressive. 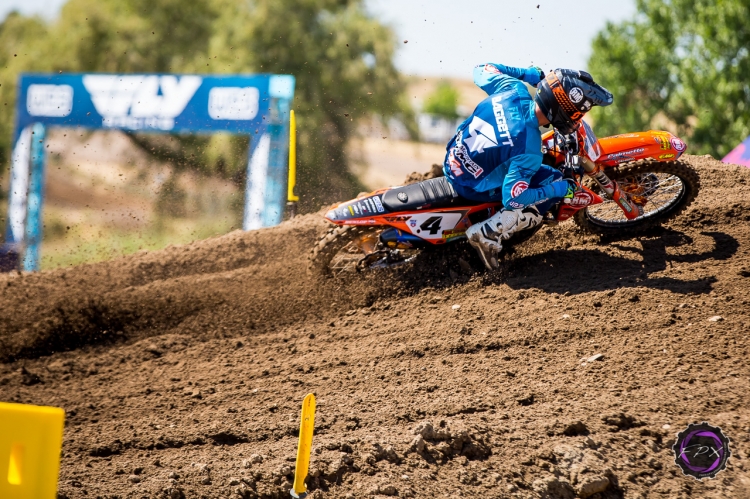 4. Dylan Ferrandis Returns to Racing for the First Time Since Atlanta Supercross

Dylan Ferrandis was off to a pretty good start to the 2018 Monster Energy Supercross season, scoring a 2nd place finish in the second race of the 250 SX East Coast championship hunt. Unfortunately, just as his momentum was picking up, his season came to an immediate halt the very next round in Atlanta. An unfortunate run in with a tuff block at the launch of the triple caused a gnarly crash that left Ferrandis with a broken arm, broken teeth, and a suspected broken jaw. He has been in recovery mode since that crash in early March and even missed the first three rounds of Pro Motocross. Ferrandis made his return to racing last weekend at High Point and was ready to make up for lost time. Regardless of how much training you’ve done on or off the bike post-injury, you definitely lack seat time in an actual racing scenario. It is to be expected that riders making their return to racing after a long stint away from competition would not have the most stellar riders of their career. However, Dylan Ferrandis showed up on Saturday and proved all of us wrong. He would score an impressive 8-3 for 4th overall. It was great to see the French rider back in action and do so well on his first race back, especially considering the extremely hot and humid conditions paired with an entirely rough and rutted track. During the second moto, Ferrandis not only showed that he is more than ready to be competitive in the incredibly stacked 250 class, but that he is absolutely capable of being a podium contender. During the entire second moto, Ferrandis was making moves and even found himself in a battle for 2nd place with Austin Forkner. He would ultimately finish the second moto in 3rd. We should expect to see Ferrandis fighting for podium finishes on a regular basis now that he has made his return to racing. 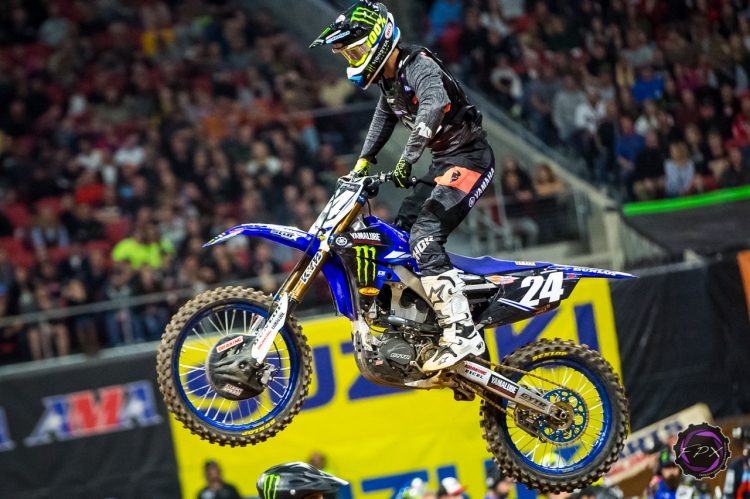 Teammates Jeremy Martin and Chase Sexton have been steady on the rise in 2018. J.Mart entered Round 4 of the Lucas Oil Pro Motocross Championship Series as the points leader in the 250 class – a lead that has been missing from the two-time former champion for the past couple of years. During the first moto, Jeremy Martin was on the charge from the moment the gate dropped, ready to defend his newly acquired red plates. Martin would finish the moto in 2nd, four seconds ahead of 3rd place finisher Justin Cooper. During that moto, commentators Jason Weigandt and Grant Langston spoke of how it was about time we see a breakout ride from Martin’s teammate, Chase Sexton. While Moto 1 wasn’t quite the breakout ride they were talking about, Moto 2 was off to an incredible start for the #40. Sexton got a great jump off the gate and was scored in 4th on the first lap. Could this be the outdoor breakout ride many have been expecting? It certainly seemed that way as Sexton battled for position, that is until all of a sudden his running order started rapidly declining. We would then see Sexton off the track, his bike smoking. The mechanical problem put a hard stop to an otherwise fantastic ride. For teammate Jeremy Martin, however, Moto 2 was off to another incredible start. Martin moved into the lead on the first lap and never looked back. He was prepared to take the overall after his first place finish in the second moto when about halfway through the moto we see Martin also with rapidly declining positions as he dropped from the leader board. His bike as just stopped. Unlike his teammate, the bike was not smoking and the moto appeared to be in ok condition. Martin made his way to the mechanics area as the team went all hands on deck to try and diagnose the problem and get Martin back in the race as soon as possible. Unfortunately for Martin, he ended up with an electrical problem that switched his day from on to off. Even with the unfortunate luck for the GEICO Honda teammates, they would both still finish the day in the Top 20 with Sexton being scored 10-38 for 16th overall and Martin being scored as 2-33 for an impressive 10th overall. However, the Top 10 finish was not enough to keep the #23 of Aaron Plessinger from reclaiming the points lead from J.Mart as we head into Round 5. 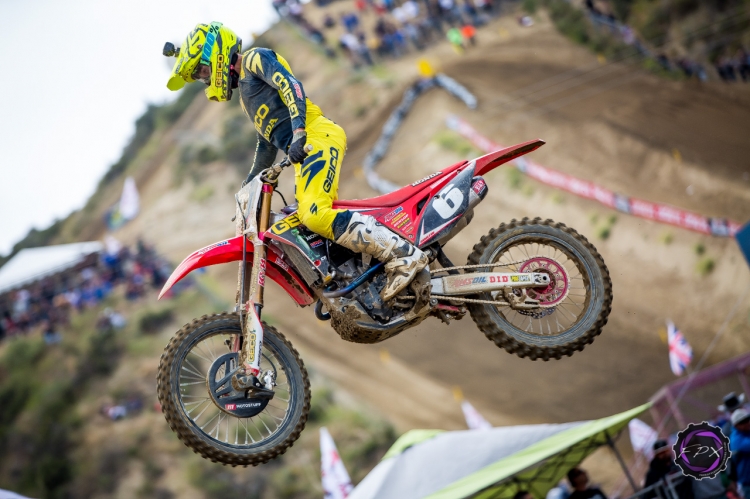 Most people know that Aaron Plessinger grew up as a “woods rider”, someone who was likely destined for a GNCC championship over a Supercross or Pro Motocross championship. However, his extensive background of GNCC style experience puts him in a very unique position in both Supercross and Pro Motocross, and that is that he is extremely adaptable to even the harshest of riding conditions. Where other riders may groan when tracks are at their roughest state, Plessinger seems to become even better and more comfortable on the bike. This absolutely played to his advantage at High Point. Plessinger made the pass for lead on the first lap of Moto 1 and then continued to place a more substantial gap between himself and the rest of the field. In the last jump before the finish and in typical AP fashion, Plessinger went for the added style points and delighted the crowd with a one-handed no-footer. During the second moto, Aaron was scored in 5th off the start. With 15 riders with lap times that were within 4 seconds of one another, AP was going to have to fight to get back to the lead. An intense battle was unfolding as Plessinger looked for opportunities to make the pass for the lead. He worked decisively, but Jeremy Martin was on rails, leading the pack by around six seconds. Plessinger had made the move up to 2nd, but had to remain patient through about mid-moto before the right opportunity presented itself. J.Mart’s misfortune and unexpected electrical problems worked to Plessinger’s advantage, as he was easily able to reclaim the lead and score a perfect 1-1 on the day. This marked Aaron’s career-first win at High Point.

Eli Tomac has been the rider with the target on his back since the first gate drop of the 2018 Lucas Oil Pro Motocross Season. And while there have been some battles for the lead, Tomac has found some Mario Kart star power near the end of every single moto, especially motos that where he wasn’t leading. Coming into High Point, Tomac was looking to expand on his perfect 6 for 6 win streak. However, one rider that has been consistently up front and right on the heels of the current points leader is the #25 of Marvin Musquin. During Moto 1, Musquin avoided the major collision off the start and was able to gain ground on Tomac very quickly. On his pursuit toward the front of the pack, Musquin engaged in an epic game of cat & mouse with the #51 of Justin Barcia. Barcia passed Musquin and took him a little wide, causing Marvin to run into the sponsor banners that line the track. Luckily Marvin remained on two wheels and wasn’t too thrown off his rhythm, but was definitely ready to set up a pass on Barcia and go after Tomac. Throughout the moto, Marvin found some unconventional outside lines that wouldn’t traditionally work as passing lines on other tracks, but the sweeping S-shaped turns of High Point were the perfect place to utilize an outside line for passing. Marvin would pass Justin on a outside line that gave him the inside advantage on the next turn. Once he was able to make the pass stick on Barcia, Musquin continued to close the gap on Tomac. Watching Marvin throughout the moto was like watching the world’s most physically demanding chess match. He studied his opponent with calculated precision and when the moment was just right, Marvin once again set up the pass from the outside line. The only way you could describe Musquin’s moto was “supercharged”. Marvin not only shut the door on Eli and made a pass that stuck, but managed to pass up through 10th place before eventually crossing the finish line nearly 5 ½ seconds ahead of the points leader. While Eli Tomac will maintain the points lead heading into Round 5, Marvin Musquin is the only other rider in the field who has managed to throw Tomac’s perfect record out of whack. I’m certain this is only the beginning of the war between these two rivals and it will be exciting to see how competition heats up throughout the remainder of the season.

High Point did not disappoint and was certainly not a low point for the fans in attendance. This weekend, we head to Muddy Creek Raceway in Blountville, TN for Round 5 of the Lucas Oil Pro Motocross Championship Series.