Each year, the Motocross des Nations is one of the most memorable and historic MXGP races of the entire racing season. This year, we were lucky enough to host the event at the storied RedBud MX in Buchanan, MI October 5-7, 2018. For only the fourth time in the 71 year history of the race, the gate dropped on U.S. soil. It is no secret that RedBud MX is one of the most sought out motocross destinations in the United States, so it made sense to select it as host to the 2018 Motocross des Nations. More than 40 countries were represented in what is considering the “Olympics of Motocross” and fans flocked to the event from all over the world, making it one of the highest attended events in American motocross history. Follow along for a look into five of the most memorable moments from the 2018 Motocross des Nations. 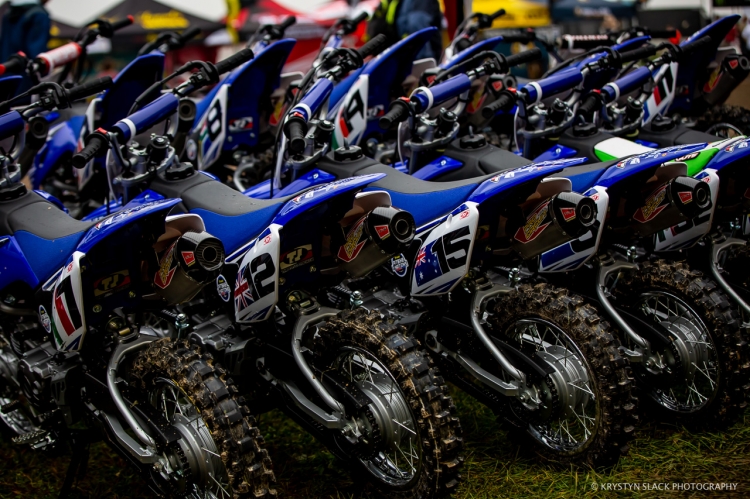 RedBud is known to be one of the rowdiest motocross tracks in the country, and always manages to attract the most passionate of fans anytime race weekend rolls around. While it’s a popular destination during the Pro Motocross season, throw in fans from around the world and you’ve got yourself a real party. To amp up the already stellar weekend of racing, Rob Buydos had the idea to host the world’s most epic pitbike race on the RedBud night track.

As you may know, the closer you get to “Lot B” at RedBud, the more passionate and adult beverage filled the fans become. Well the Saturday night inaugural “Pitbike of Nations” drew an enormous crowd and plenty of big name riders as well. Ryan Villopoto was at the helm for Team USA and it should be of no surprise to anyone, but he, along with Carson Brown and Willy Browning absolutely stomped the competition. This may have been the only trophy Team USA brought home last weekend, but the fans were just as pumped with a Pitbike of Nations win as they would’ve been with a MXoN win on big bikes. During the Main Event of the weekend, Team USA fought hard, but weren’t able to seal the deal and land on the box. The boys ended up in 6th place overall after a couple of unexpected mishaps, but they never gave up the fight and represented the stars and stripes with pride and honor. 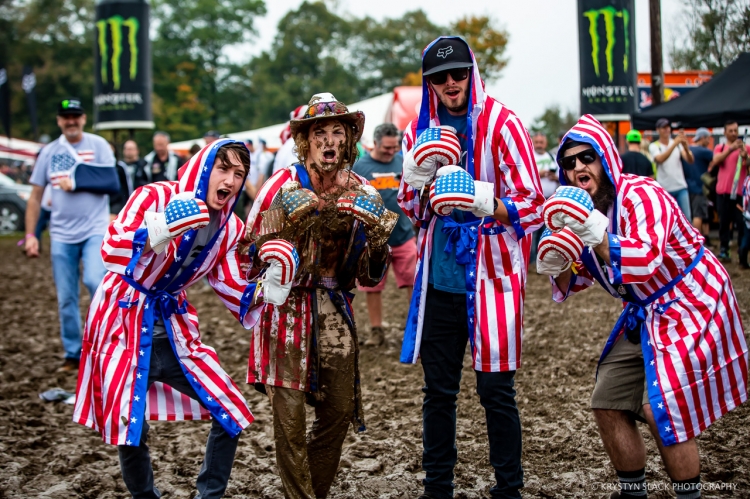 The battle cry that is called out countless times during a RedBud national is, “Can I get a RedBUUUUDDDD?” Almost instinctively, the crowd bellows out “RedBUUUUDDDD!!” and cheers erupt throughout the facility. While the familiar call rang through the hills, last weekend’s group chant really should’ve been “RedMUD”.

We know that rain and mud are frequent guest stars in a motocross race, but the mud at RedBud this last weekend was nearly the star of the show. If you thought the mud at Unadilla in 2017 was gnarly, it had nothing on the mud of RedBud for MXoN 2018. Not only did this greatly impact the riders once the gate dropped, but it impacted the fans as well. By Sunday morning, the mud was so bad that the gates had been closed to anyone who didn’t have a 4WD or AWD vehicle – causing fans to park miles from the track where it was still safe to drive.

As for the fans who were already parked before the gates closed, many of them had to rely on massive tractors to be pulled out of the sludge. In fact, it was predicted that fans who were camping would likely be extending their trips to RedBud for a few extra days because the mud was so thick that even the tractors were a lost cause for helping them. Even with the muddy inconvenience, it didn’t stop fans from filling the hillsides and cheering on their home countries all weekend long. 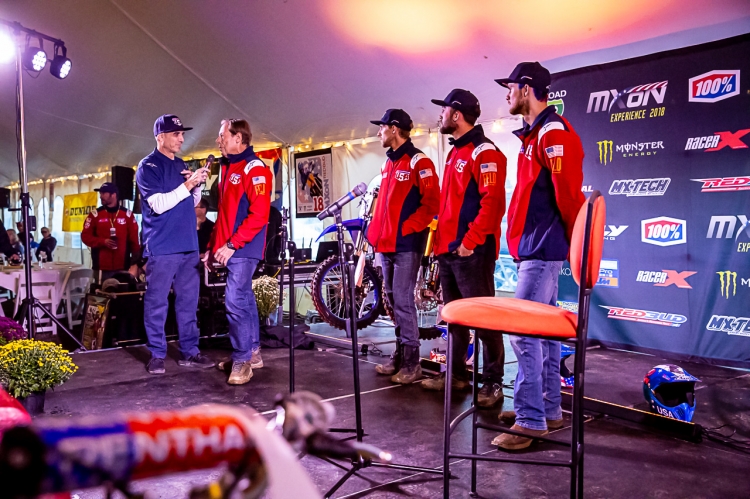 What happens when “6 Time” Jeff Stanton teams up with the Road 2 Recovery Foundation during Motocross des Nations weekend? You end up with the MXoN Experience! Knowing that this year’s des Nations would draw not only fans, but former legends of the sport as well. Jeff Stanton had the brilliant idea to round up as many former Team USA contenders and champions as possible and throw them in a venue with the biggest fans in motocross for what would ultimately be a night of the best bench racing in the history of American motocross.

Not only did Stanton want to facilitate the bench racing and smack talking, but wanted to be able to give back to the sport as well and Road 2 Recovery was the perfect partner for such a task. Superfans from all over the United States and all over the world had the chance to purchase tickets to the event which put them at a table with some true motocross racing legends. Fans were regaled with stories that have never been shared en masse as they relived some of the greatest moments in racing history paired with a great dinner and an epic autograph session.

More than 450 fans, young and old, showed up to become part of history. Never has there been and probably never will there be again as vast a collection of former champions in one space at any given time. The best part is that the money raised went to Road 2 Recovery to help with causes such as supporting the Alpine Stars Mobile Medical Unit! Fans came by the Road 2 Recovery booth the rest of the weekend beaming with excitement over how great a time they had at the dinner spending time with their heroes.

The coolest part of the MXoN Experience event is that so many of the riders in attendance were also fans of some of the other legendary riders present at the event. It was like a family reunion and a bit of a ladder system with each younger generation of riders looking up to the generations that came before them – all sharing the same space for an amazing cause. This event will be remembered as one of the best in American Motocross history.

France is only the third country in the history of des Nations racing to win five consecutive Chamberlain Cups in a row. Team USA and Team Great Britain are the only other two countries to have mastered a winning streak of such an impressive length. This year, Team France was led by Gautier Paulin, Dylan Ferrandis, and Jordi Tixier. It caused quite the commotion when Red Bull KTM’s Marvin Musquin wasn’t selected for the team to represent France, but even without Marvin, Team France came away with an impressive victory.

Going into the final moto of the weekend, five teams were still eligible to claim the Chamberlain Cup and all the glory and bragging rights that accompany it. Because of the way MXoN is scored, with the lowest score for each team being dropped before the final tally, determining a winner can come down to the wire and be up for grabs until the checkered flag flies. In fact, only two points separated Team France from Team Italy, who almost shattered the winning streak for the Frenchmen. Even though people were disappointed Marvin Musquin wasn’t selected to represent the blue, white, and red, clearly Team France knows what they’re doing when selecting a cohesive team because even the muddy weather couldn’t keep them from the winning total score.

In most races, an LCQ/Consolation race winner would be a small blip on the moto journalism radar at best, but certainly not the most talked about moment of a 3-day event – that is unless the winners of that “B Final” race include Ryan Sipes, Kevin Windham, and Travis Pastrana. No, you didn’t enter some time-space continuum. Windham AND Pastrana both legitimately lined up to represent Team Puerto Rico for the 2018 MXoN!

Never in a million years did any of us expect to see either Kevin Windham or Travis Pastrana back in a sanctioned race, and certainly not together on one team. But these legends stepped out of retired life to show the world that “they still got it”. Just when you think it can’t get any cooler to see the incredibly versatile Ryan Sipes pair up with fan favorite K-Dub and most recognized dirt bike rider in the world, Travis Pastrana, you then learn WHY they did it and you realize they are the coolest guys on the planet. More than a year after Hurricane Maria devastated the island nation of Puerto Rico, much of the country is still in distress and disarray. Team Puerto Rico has teamed up with the 501(c)3 non-profit organization Global Disaster Outreach to help rebuild some of the tattered infrastructure of the U.S. Territory. Windham, Sipes, and Pastrana lined up, determined to put their best foot forward at RedBud and show the world that Team Puerto Rico was ready to make their mark. Granted, even though they were easily one of the most popular teams in the Paddock, not even the team members expected to make it past qualifying and into the Main Event. Here are two guys who retired a lifetime ago in moto years and one guy who is a capable motocross rider, but recently more of a GNCC and Flat track specialist who are willing to take on the best riders in the entire world.

Much to the surprise and delight of the fans in attendance, Team Puerto Rico brought the “old guys” off the couch and were actually on par with many of the teams. Hard to believe that off the retired couch, Windham and Pastrana can still be some of the fastest riders in the entire world. Every lap, no matter what their position, Team Puerto Rico received the most booming cheers all around the track – and this continued throughout the entirety of practice, qualifying, and then the B Final as well. As time was running out on the B Final and the remaining laps were completed, something incredible happened. Everyone in the announcer’s tower was furiously tabulating the scores when they realized that probably one of the most historic and unlikely events was about to take place – Team Puerto Rico was on track to WIN the B Final and qualify as the final team in the lineup for the MXoN!! The entire facility collectively lost their minds and cheers rang out as Ryan Sipes, Kevin Windham, and Travis Pastrana did the impossible and WON the B Final! They would go on to finish an impressive 19th place overall while also raising a significant amount of funds for the rebuilding effort in Puerto Rico. These guys could’ve lined up and taken a DNF in every single moto and still received the loudest cheers of the weekend, but to come out and actually qualify, fans certainly witnessed history!!

The 2018 Motocross des Nations was a race for the history books and for the memory books! Already looking forward to next year!