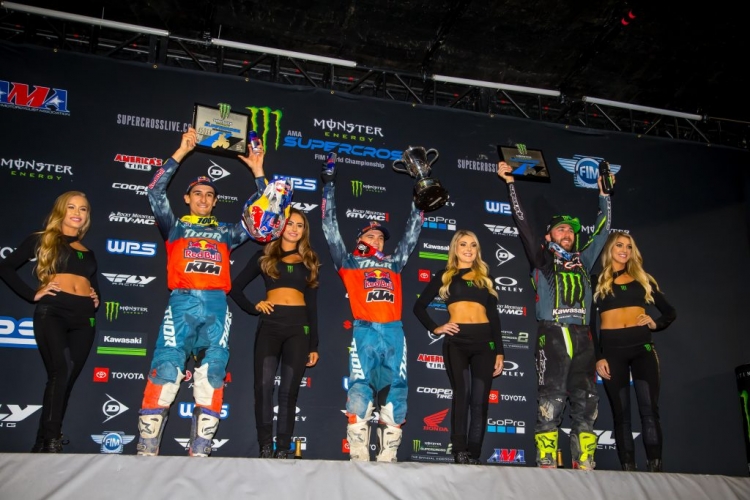 Round 3 of Monster Energy Supercross took us back to Angel Stadium of Anaheim, but this time with vastly different racing conditions – both in regards to weather and racing format. It did rain leading throughout the week leading up to the race, but the Track Crew got the track covered and protected, leaving the track in good shape come race day. This also marked the first Triple Crown Race of the season. The Triple Crown was inspired by the three Main Event Monster Energy Cup format and was introduced into the regular season last year in 2018 as a way to give fans a chance to watch even more competitive racing from their favorite riders. The jury is still out, however, for the riders as for how they’ve adapted to this three Main Event format. One thing is for certain though, is that the format is absolutely brutal for privateers. Only 18 from each class transfer into the night program, compared to 40 on a normal race week. Not only that, but the LCQ is held before the night show even begins, which means there is zero television coverage of this pivotal race – giving privateers even less of a chance to show the world what they are capable of. While there are still 22 riders on the line for each Main Event, there are no heat races that give especially privateer riders a fair shot at making the Main. When the classes are as competitive as they are this year, making it into a Main Event is a feat that is incredibly challenging, even for some of the factory riders. Because there is so little time between Main Events and more chances for potential bike failures, riders are allowed to tech two fully built motorcycles – at the Triple Crown rounds only. The catch with this rule change is that once the sighting lap has concluded, you’re stuck with whatever bike you have on the line so that means changes can only take place between motos. In addition to the AMA rule change that now allows for a second bike to be put through tech and sound inspection, the length of the race has also changed. Last year, the motor increased in duration throughout the course of the evening. However, that format drew instant criticism from many riders and the race lengths have been adjusted for 2019. Now, the 250 class is racing three 10-minute Main Events where the 450 class is racing three 12-Minute Main Events. Now that you’re caught up on the newest ins and out of the Triple Crown format, here’s a look at this week’s Fast Five – the top 5 most memorable moments from Round 3 of Monster Energy Supercross – #FansEyeView edition.

As competitiveness in the premier class continues to climb, it’s only adding to the obstacles that privateer riders must overcome in order to qualify for a Main Event. Supercross athletes are easily some of the most physically capable and fit humans on earth which means that to compete at the premier level, it certainly doesn’t hurt to have the support of a factory team behind you. Now, it’s not impossible to qualify for a Main Event as a privateer, but during the Triple Crown format you are battling not only to be part of the “Fast 40”, but have to push to be in the Top 18 during qualifying if you even want a chance at the Night Show.

Ronnie Stewart is easily one of the hardest working riders in the pits who continuously shows up ready to prove he belongs out there. After a hiatus in 2018, the #606 of Stewart returned to racing in 2019 at Anaheim 1. As the quintessential definition of a privateer, Ronnie is running his own program from top to bottom with the assistance of his wife Brooke. Ronnie is not only a rider trying to consistently qualify for a Main Event, but also performs most of his own bike maintenance throughout race day. This guy is the real deal and his results in the last two rounds are evidence of the hard work he (and Brooke) put in day after day. Round 3 of Monster Energy Supercross would mark the second weekend in a row that the #606 was lined up at the starting gate with 21 of the other best Supercross riders on the planet. Sure, most other media sites might focus the entirety of their race coverage on the Top 5 guys, but it’s the privateers who are truly the backbone of our sport and where the lack in factory support, the make up tenfold in heart and dedication. Qualifying for two Main Events in a row as a full on privateer is no easy feat and should definitely be recognized. It will be great to track Ronnie’s progress as the season rolls on.

Even though we’re only three weeks into the Monster Energy Supecross season, one thing has been clearly missing thus far – the fire and lightning fast speed we’ve come to expect from Eli Tomac. Don’t get it twisted though – his results are nothing so scoff at, as he’s finished on the podium in 2 of 3 races and sits second in points, but something in his intensity has seemed a touch off. However, all that uncertainty melted away as soon as the gate dropped for the third 450 Main Event on Saturday Night. Tomac immediately shot to the front of the pack and then began to pull away from his competition, leading the entire Main Event from gate drop to checkered flag. As time elapsed, the gap between him and second place became larger, ultimately stretching to over four seconds by the time the checkers flew. Now that’s the Eli we’ve become accustomed to seeing. The intensity, fire, and speed had all returned, seemingly in an instant. Is this the round where Eli catches fire and finally has a season where a championship doesn’t slip through his fingers at the last moment? We know he’s fast, no one would debate that! Now it becomes a game of consistency!

Shane McElrath should be on your radar as a rider to watch. He has been steady on the rise since 2017 and 2019 is off to a great start for the Troy Lee Designs/Red Bull/KTM rider. Round 3 in Anaheim once again proved that consistency is the key to a successful race outing, especially when you’re having to race three individual Main Events. Shane is not only a skilled and fast rider, but a smart and patient one as well.

During Round 3 of Monster Energy Supercross, Shane made decisive passes throughout the course of the evening and waited for his moment to make moves that would be most beneficial to his overall score on the night. To determine the overall winner for the Triple Crown format, the goal is to have the least amount of points possible as it is scored olympic style. McElrath would finish the night 3rd, then 2nd, and then 1st. He appeared to become more and more comfortable and confident on the track as the night went on and this proved to work in his advantage in a big way. Even though at the end of three Main Events he had the same 6 point score as Yamaha rider, Dylan Ferrandis, because he crossed the checkers first in the third Main Event, that score was determined as the tiebreaker. Shane currently sits 2nd in points, only two behind Colt Nichols.

Renaissance man, Justin Barcia, has really re-invented himself over the course of the 2018 season and instantly became a “rider to watch in 2019” after winning the season opener in Anaheim. Saturday night was off to a slightly slower start when Barcia finished in 7th in Main Event 1, but really seemed to settle into his groove during Main Event 2 where he finished in the 3rd place spot. Barcia was really starting to pour it on during Main Event 3, but his quest for another great finish was halted in it’s tracks about 5 laps into the race where he went down hard. While he was able to get up on his own accord, he was assisted off the track by the Alpinestars Mobile Medical Team. In a press release from Factory Yamaha, we would learn that Justin was being evaluated for a bruised tailbone. Hopefully we see Bam Bam back on the bike this weekend in Oakland because he’s on his way to be a definite champion contender.

1. Cooper Webb Shakes the Monkey off His Back and Scores Career First 450 SX Win

Cooper Webb leveled up to the 450 class after he pointed out at the end of the 2016 season. After being a back-to-back Supercross champ and a Pro Motocross champ in the 250 class, it’s safe to say that nearly everyone expected his transition to the Premier class would be a smooth one. Unfortunately for Webb, moving up to the 450 class did not immediately come with nearly the amount of ease as he had hoped. He’s fought for results from the moment he made the jump, but aside from a 3rd place finish in Oakland in 2017 and a 3rd place finish in Daytona in 2018, his 450 career hasn’t yet been something to write home about.

But the start of the 2019 season brought with it a brand new Webb. There was definitely something noticeably different about his riding and it looked at if for the first time he was genuinely comfortable on a 450. KTM is proving to be a good fit for the #2 as Saturday marked his career first 450 SX win. Even more impressive that winning the overall at the Triple Crown on Saturday night, is that he did it by winning Main Event 1 and Main Event 2 back-to-back. In the first Main Event, Webb was putting serious pressure on Roczen who lead nearly the entirety of the Main. When I say entirety I mean Roczen was leading until the last quarter of the last lap where the stars aligned and Webb found his line where he was able to finally close in on Roczen. He made the pass with only seconds remaining in the race, taking his first win on a 450. Then Main Event 2 rolled around and Cooper Webb once again found himself leading the pack. As competitive battles unfolded behind him, Webb was able to race decisively and maintain his lead, even gapping his teammate, Marvin Musquin, by more than three seconds near the end of the race. Webb would go on to finish Main Event 3 in 3rd, but that was more than enough to have the lowest combined score across the three motos, which mean for the first time in his 450 career he would be named a winner. A little confidence goes a long way for so many of these riders and I’m going to bet that this is exactly the turning point Webb needed in his 450 career to get back to the heyday of his 250 notoriety.

The 2019 Monster Energy Supercross season has only just begun, but it’s already playing out as a season that will go down in the history books. For the first time in recent memory, there are about 10 guys who could easily win a Main Event on any given night. It’s been noted before, but the level of competitiveness in the 450 class especially, will be cause for an exponential increase in intensity. This weekend we head to Oakland to battle for Round 4 of Monster Energy Supercross. Stay tuned!