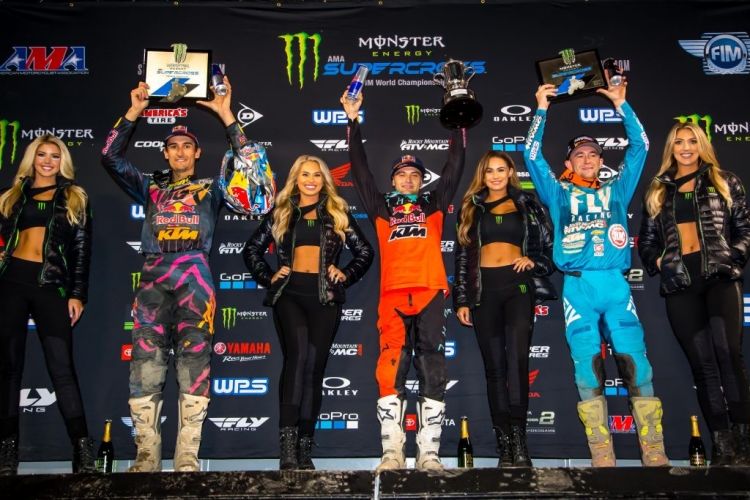 Round 4 of Monster Energy Supercross is usually when the chatter about championship contenders starts to ramp up regarding who is emerging as potential front runners in the quest for the championship. However, 2019 is off to a surprising start as not one rider has really emerged as a standout – this is both unexpected and intriguing. In fact, we had three different winners in three races in both the 250 and 450 classes, including a career first winner in the 250 class with Colt Nichols during Round 1 and then not one, but TWO first-time winners in the 450 class with Blake Baggett winning Round 2 in Glendale, AZ and then Copper Webb surprising everyone with his win at the Triple Crown during Round 3 in Anaheim. Not only were these wins almost unexpected, but so was Justin Barcia’s win at Round 1 in Anaheim, as it had been nearly six years since his last 450 Supercross win. We all know, though, that there is plenty of racing left in the season and that remaining consistent for 17 rounds is a challenge few in the sport have mastered – aside from Ryan Dungey, of course.

Heading into Round 4 of Monster Energy Supercross at the O.Co Coliseum in Oakland, CA even more shocking events took place as we learned that reigning champion, Jason Anderson, broke his arm in two places as well as fractured his rib during a practice crash. This puts Anderson out of the starting lineup for at least 8 weeks, which means we won’t be crowning a “back-to-back” champion anytime soon. In the incredibly competitive 450 class, this leaves the door open for a whole barrage of possibilities to unravel as the season races on for who moves to the top of the list of potential champions. Racing got underway on Saturday night and brought with it yet another day full of unexpected occurrences, which kept fans enthralled with the action all night long. Here’s a look at the five most talked about and memorable moments from Round 4 of Monster Energy Supercross with this week’s compelling Fast Five Recap: Fan’s Eye View Edition.

5. Justin Bogle and Dean Wilson Find Themselves in the LCQ

We returned to our regular race format for Round 4 in Oakland and there was plenty of excitement from the first gate drop to the final checkers. The track design in Oakland was interesting because there was a 90 degree first turn followed by a right hairpin 180  turn which meant that if you didn’t get a good start, you’d find yourself running out of real estate with nowhere to go but the back of the pack. Dean Wilson unfortunately found himself in this situation immediately off the start where not only did he run out of available real estate, but he jammed his knee in the process. If you’ve followed the last few seasons, you know that DeanO has dealt with more knee injuries than some of his fellow riders combined. He would try to regain composure and finished out the heat with extreme caution and not much speed, finishing in 12th place. This placed him below the transfer position cutoff.

Another fast rider, Justin Bogle, who has been getting more comfortable on his Rocky Mountain ATV/MC KTM as the season progressed found himself in a sticky situation through the whoops. Bogle would miss one of the whoops during a fast lap and then near catastrophe struck. In what was probably one of the more bizarre “near yard sale” crashes we’ve seen in recent years, Bogle looped out, causing his bike to shoot straight in the air and then as his rear fender hit the ground it snapped off with his seat cover attached! Luckily he was not injured in the process, but by the time he remounted, time was rapidly ticking down toward the checkers. Bogle would finish the Heat in 18th place.

Seeing both Wilson and Bogle in the LCQ is certainly something we didn’t expect to see on Saturday night. But luckily they were able to rebound from their heat race crashes and come back strong in the LCQ. Wilson ultimately finished the LCQ in 1st with Bogle close in tow in 2nd. The would go on to fight for position in the challenging Main Event with Dean Wilson finishing 6th and Justin Bogle finishing 10th.

This season, we’ve had a huge wave of rookies join the 450 ranks after wildly successful 250 Supercross careers. The line up includes Joey Savatgy, Aaron Plessinger, Malcolm Stewart, Justin Hill, and Zach Osborne, to name a few – all of which are heavy hitters. While it’s true that we have not yet seen Zacho on a 450 due to an injury before the season and are currently missing Malcolm Stewart after his abrupt departure after breaking his femur in Glendale, AZ during Round 2, it’s fair to say that the remaining rookies have the ability to make their mark, even during their first year in the premier class. However, it is to be expected that there will be at least a few races of growing pains as the riders adjust to not only a new bike, but new competitors, a longer season, and longer races each week as well. For some rookies, it takes a couple season of transition to really catch fire and find their groove, as is evident with the number 2 of Cooper Webb.

Round 3 of Monster Energy Supercross was filled with excitement as well as what looked to be a breakout ride for Monster Energy Kawasaki rider and 450 rookie, Joey Savatgy. When the gate dropped on 450 Heat 2, Cooper Webb ripped a massive holeshot, but Joey Savatgy was hot on his tail. Savatgy played this race extremely smart as he waited for the precise time to make his calculated move on Webb. Even in these short heat races, there is still plenty of action that can heavily impact a rider’s evening. As time was running out, Savatgy was ready to make his move on Webb and remained calm and calculated as he encroached into striking distance and then in the hairpin turn just before the second set of whoops, Webb stalled out and Savatgy was there to capitalize on the mistake. He moved into first with the precision of a much more experienced 450 rider and was able to maintain the lead until the checkers. As he crossed the finish line, Savatgy became the first rookie to win a heat race in 2019. This breakout ride for the #17 continued into the Main Event, until a bit of bad luck stopped Savatgy right in his tracks toward the end of the Main Event as the bike quit on him. He was unfortunately unable to get the bike going and had to end his night. But this minor setback is definitely not indicative of Savatgy’s skill and finesse on a 450 and we can certainly expect to see him up toward the front of the pack more often moving forward.

We’re off to a wild and unpredictable start to this season which has our fantasy picks all out of whack. Props to anyone who had the forethought to call your shot with some maybe unexpected winners here in 2019. One thing is for certain, KTM is the brand that is dominating the podium so far this year. KTM riders have secured six of twelve overall podium spots and in Oakland there was a sea of orange on the podium. We know that every KTM team from TLD in the 250 class to Rocky Mountain ATV/MC KTM WPS and Red Bull KTM in the 450 class run exceptional programs that many riders would dream to be a part of and so far in 2019 those programs have proven to be more than adequately successful. The KTM podium sweep in Oakland during Round 4 of Monster Energy Supercross was certainly great for the Austrian brand.

2. Adam Cianciarulo becomes the First Two-Time Winner in the 250 Class

If you asked any rider in the field to visualize their ideal race, you’d more than likely hear “lead the race from gate drop to checkered flag” from the majority, if not every single rider on the line. Sure, the details in the middle might vary and the types of tracks they prefer to race on is purely subjective, but the beginning and the end of the visualization would reveal the same results. Riders obviously arrive at the starting line with the same goal in mind – get the holeshot, take an early lead, lead the race, and of course take the checkers. No matter the amount of physical and mindset training, however, it’s extremely rare for everything to go exactly as planned due to the number of varying and unpredictable elements of an ever evolving race track, not to mention the 21 others guys on the line with you. But the stars aligned in Oakland as the #92 evaded the traffic off the start and moved into an early lead. While Colt Nichols was officially credited with the holeshot, it was Adam Cianciarulo who was in control of the 250 Main Event for all 17 laps. The #34 of Dylan Ferrandis was hot on the heels of Cianciarulo and worked on closing the gap throughout the main event, but a strong mental game definitely came into play on the challenging track for the Monster Energy Pro Circuit Kawasaki rider who was able to focus forward, not get caught up with lapped riders, and ultimately take the checkers as the first two-time winner in 2019 in the 250 class.

Something we’ve touched on time and again this season is how incredibly competitive the 450 class is this year. It’s been stacked in years past, but this year is an exception with regards to amount of speed and talent on the line. With three different winners in the first three rounds of racing, and realistically about 10 riders who could potentially win a Main Event on any given night, this year is truly anybody’s game and consistency is going to be an even bigger factor than it has been in years prior. Before the gate dropped in Oakland, it was defending points leader, Ken Roczen, who had led the most laps of any rider in the field, clocking in at 19 laps, but Round 4 was about to change all of that.

From the moment the gate dropped, Cooper Webb sprung to an early lead with determination in his eyes and his sights set on backing up his incredible performance in Anaheim the week prior. It’s brought up as often as a good start, but confidence and your mental game need to be at least on par with your physical game, if not stronger, in order to succeed at this sport. For riders like Webb, that shift in mindset and the belief that you can and should be at the front of the pack is not only essential, but incredibly dangerous to your competition. It may have taken him a couple seasons to find his stride, but Cooper Webb has re-emerged as a force to be reckoned with and a confident Webb is a dangerous one. As Webb began to pull away from the pack, his teammate Marvin Musquin wasn’t willing to concede without a fight. The two KTMs would battle for the entire Main Event with Musquin closing the gap on Webb from more than 8 seconds to only 1.3 seconds at the finish line. As the checkers flew, it was not only a notable occasion for the season as Webb became the first two-time winner in the 450 class in 2019, but for the first time in his 450 career he gained control of the Points Lead and the red plates. This new Cooper Webb sure looks like the old Cooper Webb from his 250 Yamaha days and that could mean clear and imminent danger to the rest of the pack.

It will be very interesting to see how the rest of the season shakes up, especially as we head into Round 5 where once again weather may play into the occasion. Join me next week in San Diego for Military Appreciation Week at Round 5 of Monster Energy AMA Supercross, an FIM World Championship.