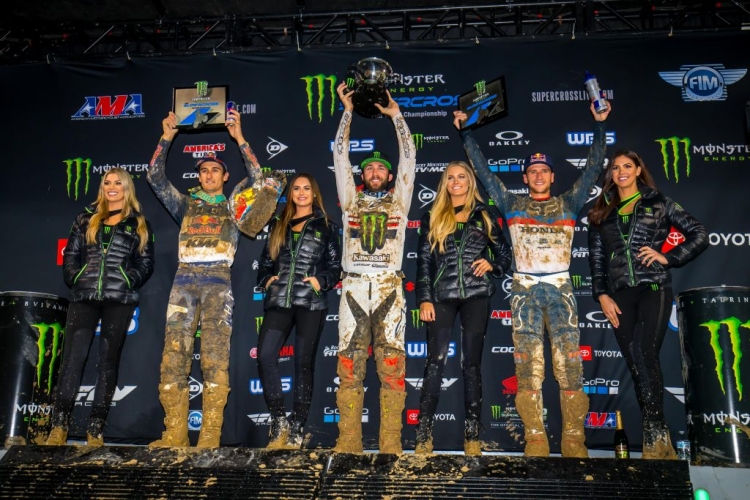 Round 5 of Monster Energy AMA Supercross was a wild ride to say the least. Mud and track conditions were the hot topic of the week, which should really be of no surprise to anyone. As a location that only sees approximately 21 days per year with measurable precipitation, compared to the national average of 110, to have a San Diego Supercross that is an actual mudder is incredibly rare. It should be of no surprise to anyone that racing a Supercross race in the mud is not only physically and mentally demanding, but takes a toll on the bikes as well. However, Saturday night in San Diego proved to be one of the most treacherous mud races in the history of the sport – mainly because the heavy rains paired with incorrect usage of the “drying agent” commonly referred to as “lime” led to very dangerous chemical burns on the riders’ skin as well as extreme corrosion of the bike frames. “Lime” is actually the inorganic compound calcium oxide and/or calcium hydroxide and is incredibly dangerous when proper precautions and safety handling measures are not taken. While “lime” has been safely used for decades, both in Supercross, that was not the case in San Diego on Saturday night. In the instance of Round 5 of Monster Energy Supercross, a regular ol’ mudder has turned into the hot topic of conversation due to the negligence regarding how the “lime” was handled during Saturday’s race and the resulting backlash. Riders took to social media to showcase the excruciating chemical burns they have all over their bodies as a result of the improper “lime” use on the wet San Diego track. If you’ve been following along with Freestyle Photocross for a while, then you know that I prefer to showcase the positives from race day. However, this situation is so dire that it is worth mentioning. Since the conclusion of the race and due to the concerns that were voiced from many of the sport’s top athletes, Feld Entertainment has issued a press release regarding the incident. You can read the full release here.

Beyond the rider safety being put in jeopardy, there was plenty of other action worth noting from “not so sunny” San Diego, including the fact that it was once again celebrated as Military Appreciation Night. Due to the proximity of so many military bases, the San Diego round of Monster Energy Supercross is always the perfect location to show some extra love for our servicemen and women who are protecting our country at home and around the globe. Each year for this race, teams put together military inspired graphics and gear. With the mud they didn’t get to show off their special graphics and special edition gear as well as they normally would, but it was still a great evening honoring our military. Let’s take a look at the top five most memorable happenings from Round 5 of Monster Energy Supercross in this week’s Fast Five Recap – Fan’s Eye View edition. 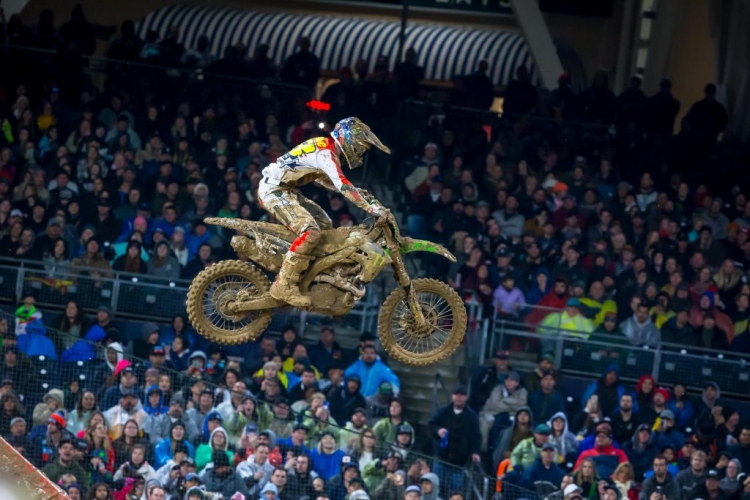 5. The Million Dollar Man Earns First Win of the Season

It is undeniable that Eli Tomac is one of the fastest dirt bike riders on the planet. In 2018 he won 16 out of the 29 total AMA-sanctioned Supercross and Pro Motocross races in the United States. After also nailing down the elusive Monster Million win at the 2018 Monster Energy Cup, it could be assumed that in 2019 Tomac would pick back up right where he has left off, winning race after race. It has taken the Monster Energy Kawasaki rider a few rounds to find his stride, but he has certainly regained his speed. On Saturday, Tomac launched off the gate and through the quagmire that was the muddy San Diego track and was able find enough speed that would keep him at the front of the pack. Even in the treacherous conditions, Eli somehow managed to gap his competition by more than 25 seconds during portions of the race. That is an almost impossible task on a dry track, so to find that much speed on one of the gnarliest tracks we’ve ever seen is damn near heroic. By the time the checkers flew, his competition had lessened the gap to a little over 4 seconds, but Eli was finally able to grab his first win of the season. This win was also just the bump he needed to move him in to the points lead and take control of the red plates. We’ve seen it time and time again where consistency plays out as the defining factor for who emerges as a championship contender. Is Eli taking a page out of former competitor Ryan Dungey’s book and focusing on consistency over wins? Will this be the year where Tomac is finally able to call himself a Monster Energy Supercross champion? Only time will tell. 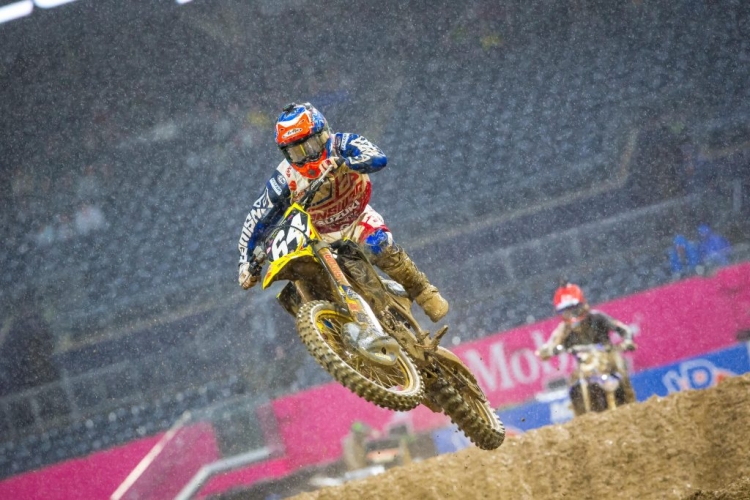 Jimmy Decotis has been a very consistent top-10 and top-5 rider throughout much of his career. “The Rippa” took most of the 2017 Pro Motocross season off after he announced that he had been diagnosed with Lyme Disease. Lyme recovery can be especially physically demanding, so to race a dirt bike at the professional level with a debilitating chronic illness takes more than just heart. In fact, Decotis’ career first podium happened during his first race back, post-recovery in Arlington in 2018. Flash forward to Round 5 of Monster Energy Supercross in 2019 where conditions were beyond treacherous, which meant that a podium finish in San Diego probably also included some additional street cred from your fellow riders. While there was plenty of action on the track, the riders were so covered in mud that it was hard to tell who was who except by their transponder times when they crossed the finish line, which meant the announcers and broadcast team were relatively quiet throughout the main. Decotis was clocked in at 6th place after the first lap and after that moment, for most riders it was a purely survival mode race. As bikes were being swallowed by the mud right and left, Decotis managed to stay on two wheels with his bike running and maneuver through the sludge up to 3rd place. He may not have gotten the usual fanfare that comes with a first podium appearance in almost a year, but he definitely earned his place on the box. This would mark Decotis’ 2nd podium finish of his career.

By the time the 450s took to the line for the Main Event, the track was obliterated due to the rain and mud and race lines looked more like a pile of spaghetti than actual line choices. Riders where fishtailing right and left as they trudged through the waist deep mud on a mission to salvage as many points as they could muster while keeping their bikes away from the depths of the lime-filled mud pits. As bikes were bogged down with mud and riders were finding themselves stuck to the track as if a magnet were holding them down, it left openings for other riders to zero in on the perfect time to make a move. The conditions proved to be challenging for most of the riders, but one rider who often fares well in even the gnarliest of environments, is Marvin Musquin. The Frenchman was scored in 10th after the first lap, which gave him a lot of ground to make up. Luckily, Marvin is incredibly skilled at calculating his passes on his opponents. Time continued to tick on in the shortened 15 minute Main Event and suddenly, Musquin went from hardly being mentioned until suddenly he had moved into 3rd place due to the perfect combination of bad luck and weird occurrences for other riders. With less than one lap remaining, Marvin Musquin was gaining on 2nd place rider, Ken Roczen, and ultimately passed him in the last straightaway before the finish. As this last lap charge unfolded, it was almost reminiscent of Zach Osborne’s pass on Joey Savatgy for the 250 East SX Championship in 2017. According to Ken’s instagram, he wasn’t even aware that he was 1) in 2nd for most of the race and 2) that Marvin was even remotely in range to make a pass. This 2nd place finish for Musquin moved him into 2nd in points and within 4 points of the new red plates holder, Eli Tomac.

This round of racing was key, especially for the 250 riders because it is the last time we’ll see the West riders until Atlanta where the East and West will throw down in the first showdown of the year. Leaving the last round before the break with a win is just the confidence boost a rider needs and one that will likely carry over to the next time they are on the gate. For this race especially, a good start was going to be paramount for success, because the sooner you were able to get in front of the pack, the less mud you’re going to be buried in. Adam Cianciarulo has greatly improved his starts over the last couple seasons and it proved to be the golden ticket in San Diego. While the goal for AC was to back up his Oakland outing, the rain and mud certainly threw in some extra unpredictable variables. Cianciarulo managed to snag the holeshot and avoided the enormous pileup of bikes behind him of the start. What most would consider an impossible feat, AC managed to gap his competitors by more than 12 seconds and once again lead from gate drop to checkered flag, racking up his third win of the year, his second in a row, and the points lead heading into the break.

A rookie rider dreams of the day they’ll earn their career first podium finish. For so many riders, however, earning a podium finish during their rookie season of Monster Energy Supercross is an illusive goal at best because competition throughout the class is fierce. The day didn’t get off quite to the best start for the rookie, Garrett Marchbanks, when he didn’t qualify directly for the Main Event after getting his bike stuck in a huge pileup during his Heat Race. Racing a mudder is already tough enough, to then have to go on to race the LCQ and spend more time in the treacherous conditions is not ideal. Marchbanks was able to regroup and went on to win the LCQ. During the Main Event, Marchbanks was clocked in 5th after the start, but would make smart decisive moves throughout the Main Event that showed the skill of a much more experienced rider. At the checkers, Marchbanks crossed the finish line in 2nd, which is career first podium appearance. Even though this is a total pipe dream for most rookies, Marchbanks has shown incredible speed and skill as he’s moved through the amateur ranks and onto the pro scene. Thanks to Garrett’s 2nd place finish, the Monster Energy Pro Circuit Kawasaki Team went 1-2, which will be excellent momentum for the team as we head in to the break.

This weekend, the series heads East to Minneapolis, MN and the US Bank Stadium, where at least there’s a roof on the stadium – although outside temps are a totally different story. It’s taken most of the week for the riders to begin recovering from their unnecessary chemical burns from Round 5, which means many of them haven’t even been able to ride this week. This setback for such a large number of riders will be interesting to see how it plays out in Minneapolis. During Round 6 will also be the first time in 2019 that we see our East Region 250SX riders. Join us next week for another edition of the Fast Five Recap!