For Round 11 of Monster Energy AMA Supercross, we traversed from the World Center of Racing in Daytona Beach, Florida to the Racing Capital of the World in Indianapolis, IN. While Monster Energy Supercross doesn’t race at the Indianapolis Motor Speedway, they do race at Lucas Oil Stadium, home of the Indianapolis Colts. As this season unfolds, it seems to be more unpredictable with every gate drop, at least in the 450 class. The 250 eastern region championship, however, is equally as exciting, but so far much less unpredictable. Here’s a look at the top five most memorable happenings from Round 11 of Monster Energy Supercross in this week’s Fast Five Recap – Fan’s Eye View Edition. 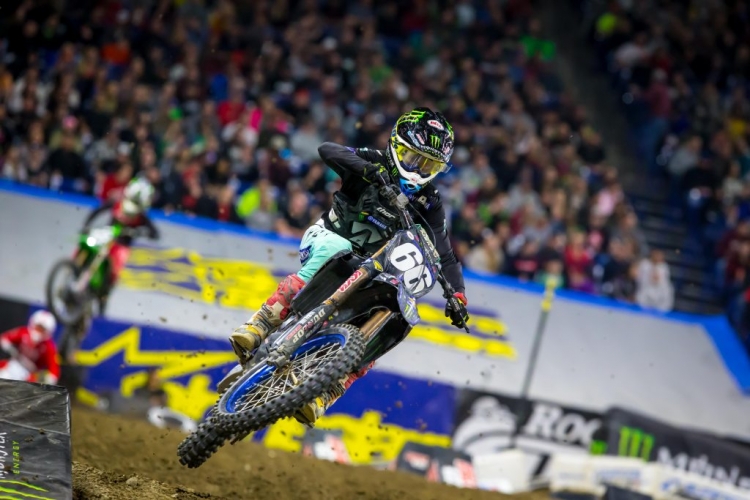 It was quite the exciting week for the Monster Energy/ Thor/ Parts Unlimited/ Star Racing/ Yamaha rider, Mitchell Oldenburg. Last weekend in Daytona, Oldenburg had a season-best finish of 4th, which happens to also be his career-best finish in the 250 SX Eastern Region. Then just before heading to Indianapolis for Round 11, Oldenburg and wife, Alexandria, welcomed their son to the world on Friday, March 15, 2019. Mitchell Oldenburg carried that momentum of excitement through race day on Saturday. In Heat 1, Oldenburg got off to a great start and quickly moved to the front of the pack. He would lead the first three laps before being passed by Chase Sexton. Then, during the Main Event, Oldenburg was able to grab a pretty decent start, which is essential when you have a 90 degree first turn and you run out of track real estate in a hurry. Oldenburg would make decisive passes from a 6th place start and moved into a podium position after a cat and mouse chase with the Kawasaki rider, Martin Davalos. He remained in a podium position for a good chunk of the Main Event, until late in the Main Event he left the inside of a turn open and his teammate, Justin Cooper, took full advantage of the pass opportunity. While Oldenburg wasn’t able to regain that 3rd place position, he was able to finish the Main Event in 4th, matching his season-best finish. Not too bad a week to bookend the birth of your first son with matching season-best finishes. 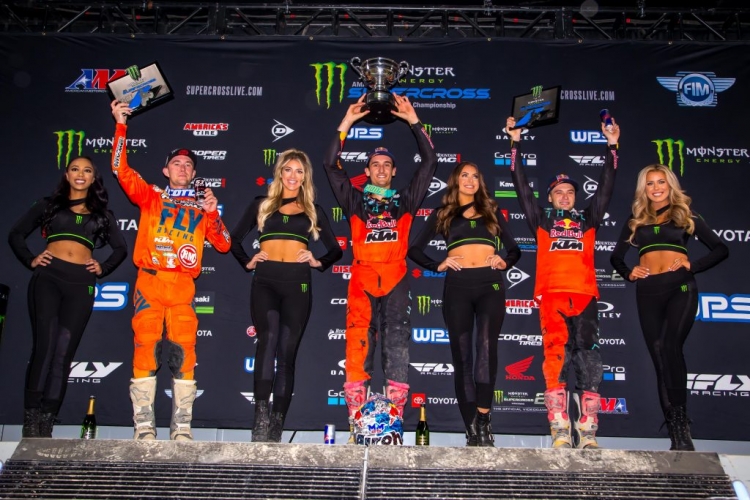 4. Pumpkin Parade – KTM Sweeps the Podium for the Third Time in 2019

This season is shaking up to be one of the most exciting in recent years. And if you’re Roger DeCoster, this is a really exciting year for you as the head of the racing program for KTM and Husqvarna in North America. KTM riders are the ones to beat this season and they have already claimed a whopping 20 of 33 podium positions in the 2019 season! In Indianapolis, KTM riders once again led the charge for almost the entirety of the Main Event. Marvin Musquin took an early lead, and fellow KTM riders Blake Baggett and current Points Leader, Cooper Webb, navigated from the 4th and 5th positions respectively up to 2nd and 3rd fairly early on in the Main Event. Between the three frontrunners, there was a lively game of cat and mouse that took place throughout the 20 minute plus 1 lap Main Event. Lap after lap, the three KTM riders laid down the fastest laps on the track. In fact, by the time the checkers flew, there was a mere 2.45 seconds between 1st and 2nd and 2.85 seconds between 2nd and 3rd. For the third time this season, it was pumpkins on parade as KTM once again swept the podium in the premier class. 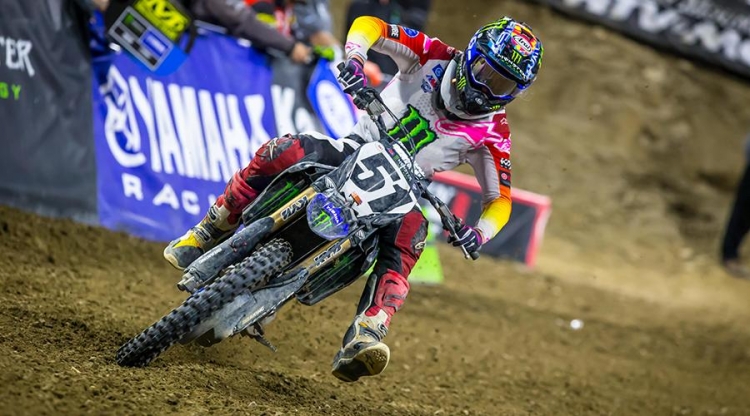 Following a 3rd place finish in Detroit during Round 8 of the Monster Energy Supercross season, the #51 Yamaha rider, Justin Barcia, was looking to carry the momentum into his ride in Atlanta. Unfortunately, while training during the week, he had a crash that resulted in a concussion. In order to return to racing after a concussion, riders have to follow concussion protocol and be cleared by the Alpinestars Mobile Medical Unit team of doctors before returning to competition. While everyone hopes that riders return to the starting line quickly, the safety of the rider is of the utmost importance. Justin Barcia ended up sitting out both Round 9 in Atlanta and Round 10 in Daytona, but was cleared to return to racing in Indianapolis. Justin Barcia earned an impressive win in the season opener, but has been struck with a couple bouts of bad luck and unfortunate circumstances, including a badly bruised tail bone during Round 3, and it has taken some time to get back in his stride. After having to take more than two weeks off from riding from his crash after Detroit, not to mention still healing from his tailbone injury, Barcia was able to score a 5th place finish in Indianapolis. Even though we are more than halfway through the season, there is still plenty of racing left in 2019 and plenty of time for Justin Barcia to score some great finishes in the remainder of the season.

2. Austin Forkner is Fast As Fork

It is Austin Forkner’s third season in the 250 class, and his second year racing in the Eastern Region. From the moment the gate dropped for the 250 East riders, it has been the Austin Forkner show. If Forkner gets out front, look out because his competitors are going to have a very minimal amount of time in the Main Event to make up a lot of ground if they even have hope in catching the #24 Monster Energy Pro Circuit Kawasaki rider. In case you’ve been living under a rock, Austin Forkner is fast this season, really forking fast!

While Austin has led every single East Region lap leading up to Indianapolis, one question remained, “It’s one thing to lead laps when you’re on top of the world, but how would he handle adversity on a less than perfect night?” Well, we found out that answer during Round 11. Forkner had qualified fastest, which placed him in the Heat 2. Off the start, Forkner had a handful of throttle and was ready to grab the holeshot when he realized that he had way too much speed coming into that 90 degree turn. He clipped a tuff block, ran out of real estate to recover, and got thrown from the bike. In the chaos, he was also run over and then almost landed on by the same bike that had just run him over. As the bike of Lane Shaw rocketed down towards Forkner, Austin somehow managed to practically Hulk out on the flying dirt bike and actually shove it out of the way before it fully landed on him. A short moment later, you could tell that Austin realized that he was only in the start of a six minute plus one lap Heat Race and that meant he needed to act fast if he wanted to transfer directly to the Main Event. Without hesitation, Forkner remounted his motorcycle and got to work. At the end of the first lap he was logged in last place with the clock elapsing quickly. Somehow, Forkner managed to not only move up to the 9th place finish that he needed in order to avoid the LCQ, but was able to pass all the way up to 5th. For so many riders, this type of situation would totally rattle them and throw them off their game a bit come Main Event time; but not Forkner. He managed to put the Heat Race behind him and once again dominate the entire Main Event from gate drop to checkers. When all was said and done, Austin Forkner crossed the finish line more than nine seconds ahead of 2nd place finisher, Chase Sexton, and had lapped riders up through 10th place. On the podium, Austin made a comment that he had been sick coming into Indianapolis, but you never would’ve known it watching that Main Event. Will anyone be able to stop Austin Forkner or will he be the only rider in the “fast as Fork” category?

1. Marvin Musquin Lights the Candles with his Signature Heel Clicker

It’s been a minute since we’ve seen Marvin Musquin leading the charge for the RedBull KTM effort. We know that Marvin Musquin is an incredibly skilled and fast rider and I’m sure after Ryan Dungey’s retirement, probably even Marvin expected to be the only “big man on campus” for the team. During the 2018 season, that was the case, but after an unfortunate knee injury late in the off-season, it has taken a bit longer for Marvin to re-gain his full stride and the speed we all know he’s capable of – especially since Cooper Webb has really started to come into his own in the 450 class. Of course, even though it’s been 10 winless rounds, Marvin Musquin’s riding has been nothing to scoff at as he has landed on the podium in 7 of the 10 rounds leading into Indianapolis and sat 3rd in points.

In a season where on any given Saturday, nearly any one of about 10 riders could win a Main Event, a good start a become an especially relevant piece of the puzzle. Sure, that’s said every year, but this year it is imperative to get out front early because the field is absolutely stacked. When the gate dropped on Round 11, Musquin finally found himself in the position he’s been chasing all season, out front with the holeshot and the lead. Surprisingly, he came from the outside into the 90 degree first turn and still managed to launch to the front of the pack without running out of real estate the way we saw so many other riders do throughout the night. Once he got out front, it was necessary to race forward and hit his marks if he wanted to remain in the lead because he had plenty of fast guys right on his tail. But Marvin is no stranger to racing under pressure on tough tracks. While there was a bit of a chase between 1st, 2nd, and 3rd, it would ultimately be Marvin Musquin who crossed the finish line first and lit the candles with his signature heel clicker over the finish line jump. This is Marvin’s first Supercross win since Salt Lake City in 2018 and the points earned at Round 11 were just enough to slide him into 2nd place in the Championship, just behind his teammate Cooper Webb.

Round 12 will take us from the midwest back to the West Coast, giving the 250 Eastern Region riders a short break. Who will emerge victorious in the Emerald City? Stay tuned for an all new “Fast Five Recap – Fan’s Eye View Edition” next week!