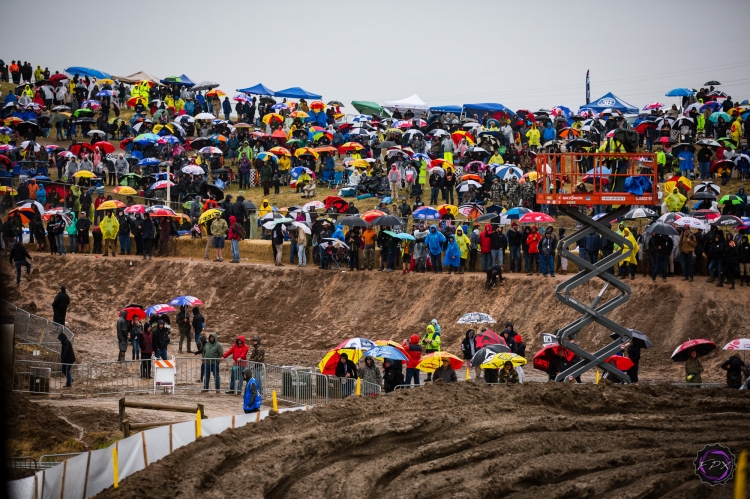 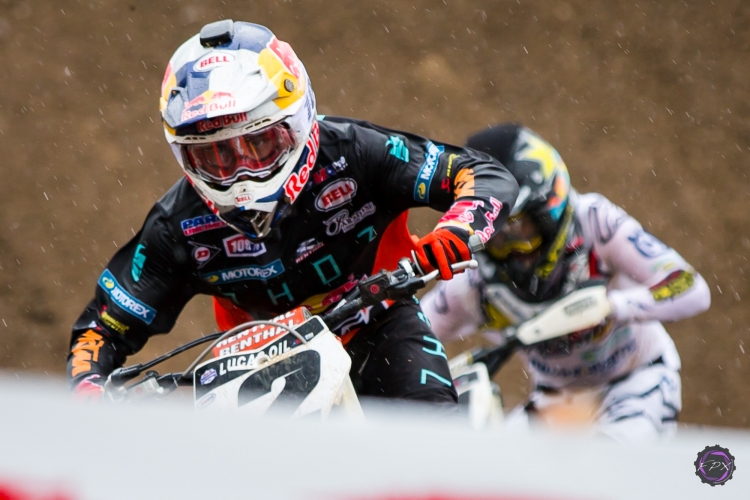 We know that weather was a hot topic of conversation throughout the 2019 Monster Energy Supercross season, but it’s rarely the topic of conversation during the first part of the Lucas Oil Pro Motocross season, especially at Hangtown. But this year threw and unexpected wrench into the plans with rain in the forecast both prior and during Hangtown. It ended up raining Wednesday and Thursday, cancelling the media ride on Thursday, and then again on Saturday. The rain held off for the morning qualifying sessions, but let loose by the start of 450 Moto 1. It continued to rain throughout the remainder of the program and since it had been dry in the morning, the perfectly prepped track became slick as grease as soon as the rain hit. To put this in context, the average temperatures for this time of year near Sacramento, CA are in the 80s with not a drop of rain in sight. In fact, this is only the third time in the 51 year history that Hangtown has been held in the rain. Of course, the race goes on, rain or shine, but it certainly makes for an added element of excitement and unpredictability.

A couple years ago, MX Sports added a 125 race to a few rounds of the Pro Motocross series. It seemed to take the place of the former WMX races that would be held on the day of the National. Having 125cc two-strokes return to the starting gate certainly added some excitement and nostalgia to race day. Fans and riders alike were stoked to hear the return of a full gate of two-strokes. In fact, the series became so popular that a 125cc race was added to all 12 rounds of the Pro Motocross Championship Series this year.

The winner of this year’s 125 All Star Race at Hangtown was Ryan Villopoto. Maybe you’ve heard of him? RV may have retired from professional racing, but that certainly hasn’t kept him away from the bike, especially when he’s given the chance to relive his 125 glory days aboard an expertly built and tuned YZ125. Of course, having someone like Ryan Villopoto on the line isn’t just exciting for fans, but for racers as well. Getting the chance to line up with one of your racing heroes on a national track on a 125 is a dream come true for many and it showed on Saturday. Rounding out the podium was Nor Cal’s own “B-Ray”, the #19 of Brandon Ray in 2nd and the #141 of Robbie Wageman in 3rd.

2018 Monster Energy Supercross champion, Jason Anderson, missed most of the 2019 Supercross season, including the opportunity to defend his title, due to a collection of injuries he sustained during a practice crash. But, he was finally able to make his return to racing during the first round of the Lucas Oil Pro Motocross Championship Series at Hangtown.

With an extended time off the bike, it is always up in the air for how a rider will do their first race back on the line. Granted, they continue their training program as soon as they are able, but seat time for a race scenario with 39 other bikes on the line only happens during races themselves, which can lead to huge setback for riders after a return from injury. A first race back often also includes an increase in adrenaline, that can sometimes be to the detriment of the rider. This was not the case, however, for the #21 of Anderson at Hangtown. He came out the gate charging and ready to battle. Anderson got a great jump out  the gate during Moto 1 and was able to finish 2nd in his first gate drop back since injury. As the rain got heavier and the track muddier between the first and second moto, it slowed him down, but only a bit and he finished in 5th in the second moto. The 2-5 finish was enough to put him on the overall podium in 3rd. A podium finish for a first race back in months always does wonders for a rider’s confidence level and it will be great to see how the season unfolds for “El Hombre”.

2. Adam Cianciarulo Bounces Back from the Supercross Finals with a Win at Hangtown

Barely a week ago, Adam Cianciarulo’s championship dreams came to a screeching halt during the 2019 Monster Energy Supercross Championship finals in Las Vegas. An unexpected crash that led to a completely mangled bike and a 20th place finish was not how AC, or anyone else really, expected him to end the Supercross season. But as Adam stated in the pre-race Press Conference for Hangtown, “You can’t change the past. It is what it is. Back on the grind”. And that’s exactly what he did. Cianciarulo never let the unfortunate ending in Vegas hold him back from approaching the start of the Pro Motocross season with a positive outlook. AC has one of the best mental games in out sport and younger riders could definitely learn a thing or two from his always positive mindset, even amid challenging circumstances.

Hangtown also marked the first Outdoor National for Cianciarulo since the season finale at Ironman during the 2017 Pro Motocross season. Unfortunately, AC was out for the entirety of the 2018 Pro Motocross season due to a knee injury he has sustained during Supercross. This is of note because it meant it was also his first dirt start since 2017 as well, since Supercross has moved to a grated start. This may seem insignificant to outsiders, but the difference between a grated start and a dirt start is substantial. We know that a good start is key in any race, but definitely even more challenging in a dirt start scenario. Adam not only grabbed a great start in both motos, but finished 2-1 for 1st overall on the day! It’s great to see AC start the season off with such a bang. .

You read that right, it’s been 854 days since we last saw Ken Roczen on the top step of the podium. What race was that, you ask? That was San Diego Supercross, 2017 – the week before his fateful crash that almost cost him his arm and his career. The Ken Roczen Story will easily go down as one of the greatest comeback stories in sports history, and not just in moto. Where the world doubted the #94, Ken was always prepared to return not only to racing, but to the top step of the podium no matter how long the journey was going to take.

We’ve watched in awe and admiration as Roczen has fought his way back to the racer he’s always been. Along the way, he has been within reach of that elusive first win many times, but it barely slipped through his grasp in the incredibly competitive premier class. The thing about Kenny, though, is he is not only incredibly strong physically, but has a mental game that is untouchable by any racer on the field. Saturday, however, was Kenny’s day from start to finish. He immediately logged the fastest qualifying time, giving him the pole position when it came to gate pick. As the rain came down, his speed never seemed to let up. During the first moto, he got off to an early lead and never looked back, taking the checkers more than 15 seconds ahead of second place finisher, Jason Anderson. The second moto he continued the battle, and ultimately crossed the finish line in 2nd. His 1-2 finish was enough to finally earn his first win since returning to racing. It’s a true testament to Ken’s character and perseverance that even other teams went out of their way to congratulate the #94 on this historic win. Emotions were high as the entire team celebrated this long sought after victory.

It may have only been the first race of the 2019 Pro Motocross Season, but it sure was exciting. I’m going to call it now, but 2019 is likely to be one of the most competitive and historical Pro Motocross racing seasons in history. This weekend we head to Fox Raceway in Pala, CA for Round 2. Will we see you there?