The time between Monster Energy Cup and Anaheim 1 means a ton of behind the scenes work for race teams, finalizing their riders and sponsors, while also dialing in bike setup for the upcoming Supercross season.

Supercross, unlike many professional sports, is truly one of the most accessible sports for fans of all ages. With tickets starting at $20 in most cities and admission to the Party in the Pits free with an empty Monster Energy can, Feld Motorsports puts on an incredibly fun and immersive event for Supercross LIVE! fans.

As we progress through the West Coast rounds of the 2016 Supercross season, join me for a “Fan’s Eye View” of all the action and excitement.

After much anticipation during the off-season, Anaheim 1 always starts the year off with a bang and brings with it a great pit party experience, packed house, exciting racing, and of course a little drama. The 2016 season opener at the “Big A” certainly did not disappoint.

At the Party in the Pits, fans have an opportunity to get their picture taken with Monster Energy girls, check out the factory rigs, win cool swag, and meet the riders – privateers and hometown heroes and even the top riders in the industry, including Mr. Wheaties himself, the 2015 SX and MX champ, Ryan Dungey. Fans travel from all over the country and the world for a chance to experience Anaheim 1 for themselves. 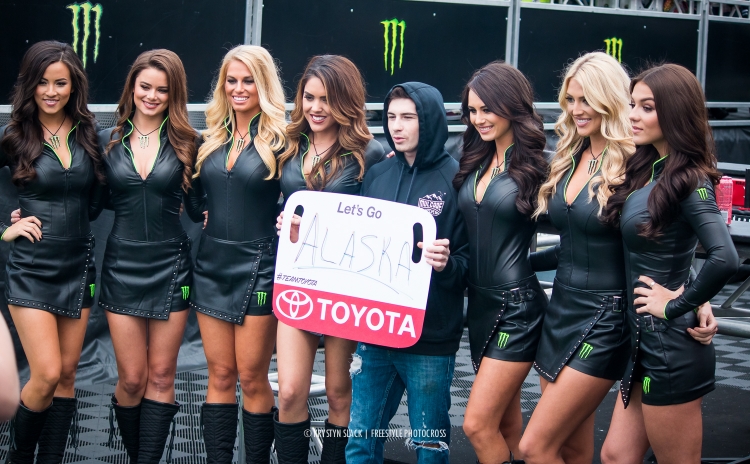 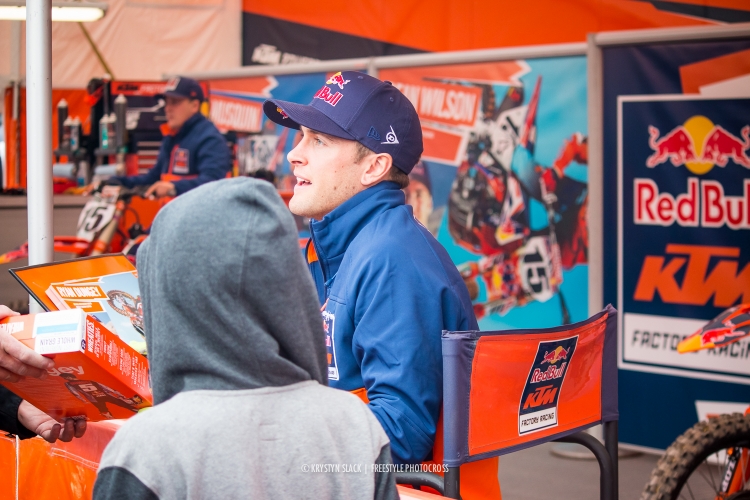 Fan favorite and “baller on a budget” Adam Enticknap (aka The SevenDeuceDeuce) is always out to make sure the fans have a great time. 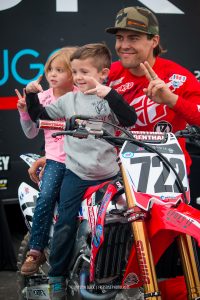 As the pits emptied out and the stadium filled up, the top 40 riders in each class were ready for the moment we had all been waiting for, the first Night Show of 2016. Supercross continues to impress me with their opening ceremonies, from how they introduce the riders to the way they honor our first responders and soldiers overseas and the guest lap appearances by legends like Jeremy McGrath and Ryan Villopoto.

I’ve attended Supercross races for years, but this Anaheim 1 was one for the record books. Once racing began, there was no lack of excitement or lack of drama. No wonder it’s called the Night Show – and, boy, what a show it was! There were first turn pileups, red flags, dramatic upsets, knockouts, and even a fistfight. Anaheim 1 always sets the stage for an exciting season of racing, and 2016 was no exception. The much-anticipated return of James Stewart was short lived as he was knocked out during a racing incident run-in with Ryan Dungey. Long time fan favorite, Chad Reed is back on a factory Yamaha team. After getting himself tangled up and thrown from the bike during his heat race, and a rough start in the main, Ken Roczen had one of the most impressive rides of the night riding from dead last and finishing the evening in 5th.

Ultimately, it would be Cooper Webb, who picked up right where he left off last season, lighting the candles in the 250 class. In the 450 class, Jason Anderson was a hard charger all night long and managed to keep it on two wheels all the way to an impressive and nearly unexpected 450 Main Event win – a first for him in the 450 class and a first ever for a Husqvarna.

For more photos from Anaheim 1, make sure you visit: