It may only be the second week of the Monster Energy Supercross season, but already it’s shaping up to be one of the most thrilling seasons in recent years. This week, our “Fan’s Eye View” recap comes to you from Petco Park in San Diego. Home of the San Diego Padres, Petco Park is located smack dab in the middle of downtown San Diego, setting the cityscape as the backdrop for a full day of exciting racing. For the first time, there will be not one, but TWO San Diego races this year; the second will take place Valentine’s Day weekend on February 13, 2016, also at Petco Park. 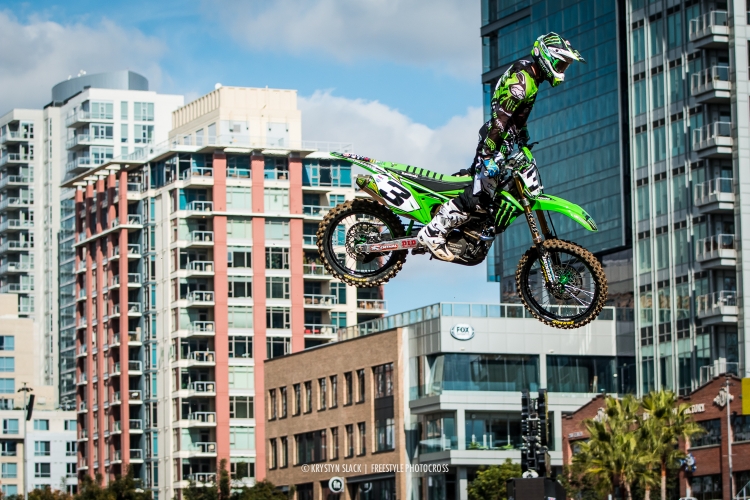 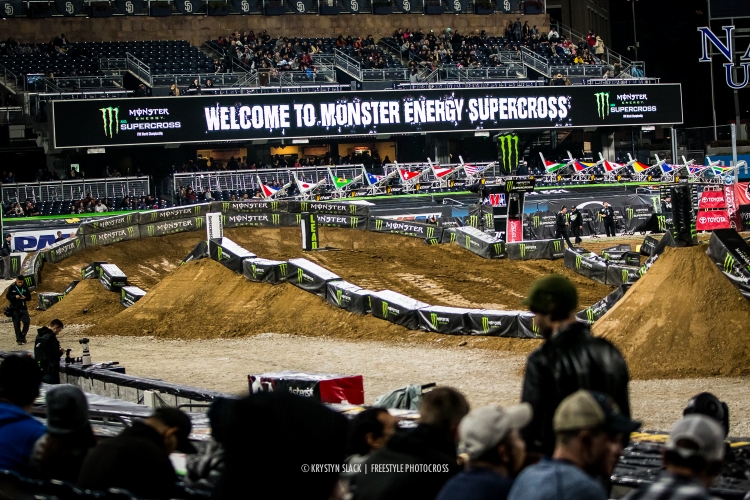 Having James Stewart back in the mix after his 16 month AMA suspension is guaranteed to add to the drama and exhilaration of this season. Unfortunately for fans, Stewart has yet to complete a Supercross Main Event since making his return. A hard hit collision with the champ, Ryan Dungey, during the first lap of the 450 Main during Anaheim 1 placed him on the concussion watch list. Although Stewart was medically cleared to race in San Diego, he pulled out of the race shortly after qualifying practice – again tugging at the heartstrings of JS7 fans everywhere. There is no denying the talent he possesses on a bike when he’s healthy. Hopefully we get to see the “real” James back in action sooner rather than later. The only question now is, “Will the real James Stewart please stand up?” 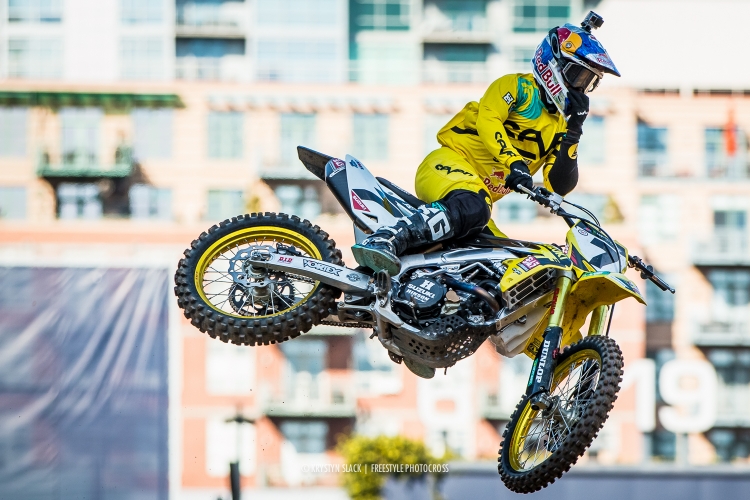 In addition to watching the pros battle it out through Heat Races, Semis, LCQs, and Main Events, Monster Energy AMA Supercross also showcases one of the most talked about events on the circuit, the KTM Jr. Supercross Challenge. Now in it’s sixteenth year of existence, the KTM Jr. Supercross Challenge (KJSC) gives talented young groms the opportunity to “go pro” for a day and ride the same tracks as their childhood heroes. Not only do these little rippers get to ride the same track at the pros, but they get the full factory experience as well – everything from a fresh kit and a factory KTM 50 SXS to pitting in the KTM factory rig to signing autographs, and even their very own podium experience. To say that this is an experience of a lifetime for these kids and families is an understatement – just ask former KJSC alumni turned multi-time champion, Red Bull KTM’s Ryan Dungey.

During the Night Show, Star Racing Yamaha rider Cooper Webb continues to dominate the 250cc class, even after a rough Heat Race. For the second week in a row, the Number 1 hangs on to the Red Plate and points lead with a perfect 50 points. But coming in hot on his heels is Monster Energy Pro Circuit Kawasaki rider Joey Savatgy. Coming in first in his heat and second in the Main Event, the Number 37 of Savatgy will continue to be one to watch this season. Zach Osborne is also looking for his spot on the podium. The Rockstar Energy Husqvarna rider has put in two consecutive weeks of impressive qualifying and heat races, but hasn’t made a podium appearance… yet. GEICO Honda’s Jordan Smith, however, came in third place in the Main Event – his first ever career podium.

In the 450 class, after an impressive win at Anaheim, defending points leader and current Red Plate holder Jason Anderson fought hard for another podium spot this week in San Diego. While he finished the Main Event in third place, he would ultimately land himself in fifth after the AMA issued a penalty to Anderson for jumping on a Red Cross flag – docking him two places. Justin Brayton, who was Saturday’s fast qualifier, was inched out of the Holeshot off the start by the 22 of Chad Reed. The reigning champ, Ryan Dungey, quickly maneuvered his way to the front of the pack and never looked back, even though Chad Reed was keeping him honest for all 20 laps of the main. They held off the rest of the pack all the way through the checkers with Ryan Dungey lighting the candles and reclaiming the points lead and Red Plate with Chad Reed coming in a close second. Historically, San Diego is a results-producing race for Reed, and this year was no exception. The #yearofthehasbeen, as Reed proclaims on social media, is certainly off to a good start for the all-time podium appearance leader. Say what you want about Chad Reed, but he races with so much passion and heart and the fans love to see him up on the box!

Don’t forget, Monster Energy AMA Supercross, an FIM World Championship, will be returning to Petco Park on February 13, 2016 for military appreciation night. Get your tickets today at www.supercrosslive.com.