As a freelance journalist without media credentials {aka Full Time Privateer/ Spectator Extraordinaire}, my goal is to bring you an out-of-the-box look at the Monster Energy AMA Supercross season, an FIM World Championship. Any rider knows the hustle that comes along with being a privateer and working toward a ride under a factory rig, and for this privateer photographer, I’m certainly no stranger to that hustle and grind. This week’s “Fan’s Eye View” comes to you from the O.Co Coliseum in Oakland, CA and a big “thank you” goes out to Racer X and CTi Knee Braces for making this installment of “Fan’s Eye View” a possibility. 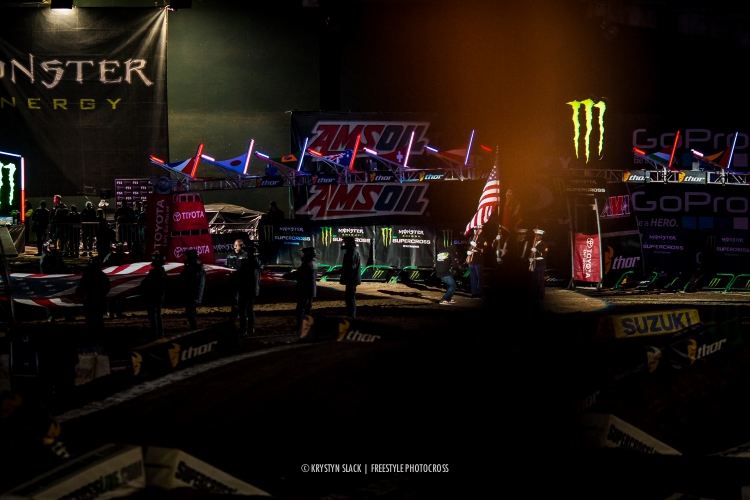 Supercross may not be the sport that comes to mind when you think “mainstream”, but that doesn’t stop thousands of fans from travelling from around the country to races each weekend to cheer on their favorite rider from qualifying practices all the way to podium finishes…. Nearly a 12-hour day of racing if you’re in it for the long haul like so many fans. One of the most unique things about Supercross is, without a doubt, the access to the athletes and the fan experience as a whole. Fans young and old have an opportunity to meet their favorite riders and even design special posters to cheer on their racing heroes in the Night Show. 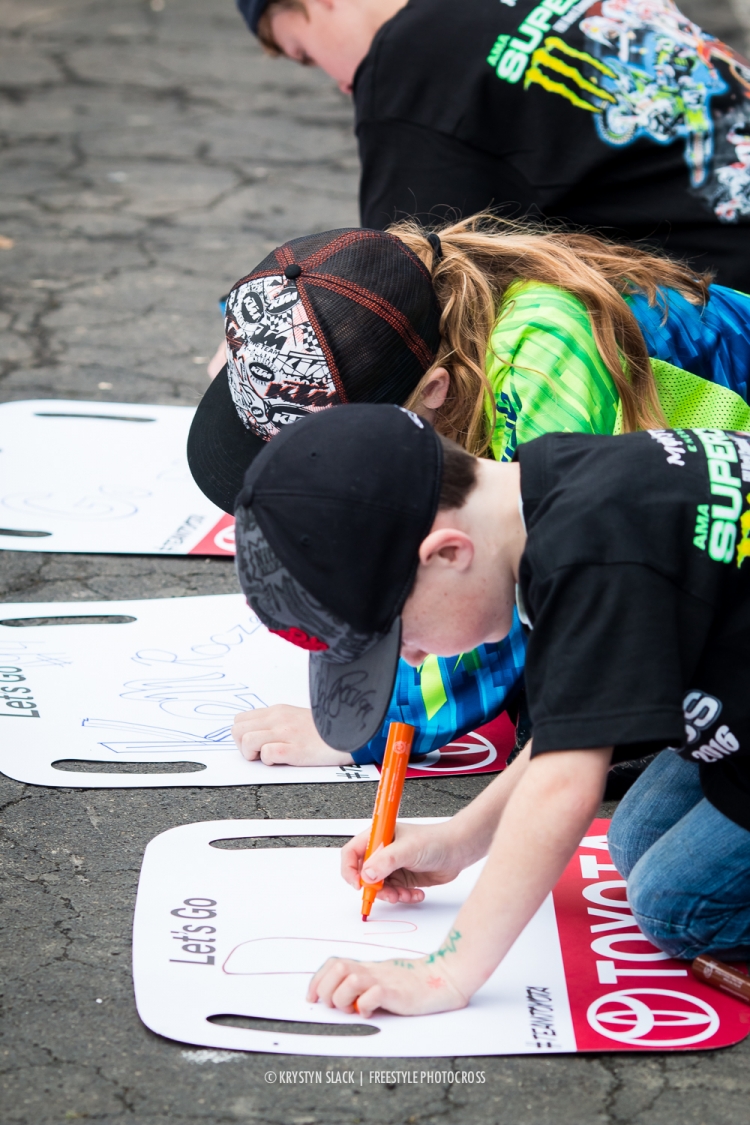 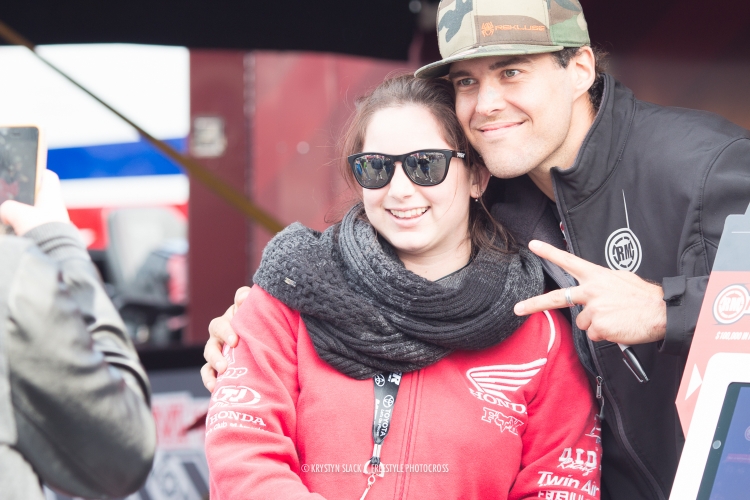 If you’re thinking, “It’s the fourth round of Monster Energy AMA Supercross, so I’ve got it pretty dialed as far as who ends up on the podium…. My fantasy picks are definitely on point.” Well guess what, you’re probably wrong and left the races as surprised as I did. The 2016 season is certainly not lacking in excitement, drama, and unexpected turns.

Cooper Webb was going for his fourth straight 250 Top Step, Saturday night. He was well on his way to retaining his undefeated perfect record – leading 9 of 15 laps in the Main Event – when a mechanical issue in lap 13 caused him to stall out. The crowd watched in shock as kick after kick, the undefeated champ couldn’t get his bike restarted. There was a collective “Noooooooooo!!!” that broke out across the stadium as Cooper rapidly dropped on the leader board from first to second to third and all the way to 21st where he would ultimately finish the race.

But hot on his heels was the 37 of Monster Energy Pro Circuit Kawasaki, Joey Savatgy. Joey has been riding consistently in the front of the pack in his heat races and is hungry for a win. There is no doubt that he’s going to be the one to watch as the season continues to unfold. Unfortunately for Cooper, Joey was ready to capitalize on the bike malfunction with an easy pass for first place. He led the final three laps of the Main Event, and managed to light the candles for the very first time. Now that Savatgy has a win under his belt, my bet is that the race is on between him and Webb for the remainder of the season. The extra boost of confidence that comes from that Top Step may be just the edge he needs to really give Cooper a run for his money.

The 250 class may not be the “premier” class, but the riders in that class always bring with them true grit and a tenacity that makes for really exciting racing. Other notable 250 performers include Colt Nichols, who charged from mid pack and evaded some near sketchy situations to come away with a 2nd place finish, his first pro podium appearance. Christian Craig, who landed himself a podium spot for the second week in a row, including another Holeshot, continues to impress the crowd. While he’s no rookie, the couple year break he took from racing may be the best thing to ever happen to him.

In the 450 class, it was sadly another week of disappointment for James Stewart fans. While James came in second in his heat, he pulled himself out of the Main Event mid race. I’m sure spectators are probably thinking that he pulled himself out of the Main because he wasn’t running front of the pack, or some other bit of internet trolling that people behind a screen are so good at… But the thing about brain injuries such as concussions, is that yeah, from the outside, everything looks peachy, but even the slightest residual side effects from his run in with Ryan Dungey during Anaheim 1 could mean disaster on a Supercross track. Hopefully we see a healthy James Stewart back in action soon – the fans sure do love him.

Blake Baggett also made his return debut in Oakland. For only being his first week back after injury, he looked good in practice, qualifying in 11th. After a rough get-off in his heat, Blake landed a transfer spot to the Main Event coming in 4th in Semi 1. Ultimately, he would finish the night in 15th place. Not where we’re used to seeing Blake Baggett after finishing last season 5th in points, but a good start for his first race back.

The one thing that has remained consistent in the 450 class thus far is Mr. Consistent himself, the Champ – Ryan Dungey. Dungey has made podium appearances during all four rounds of the 2016 Monster Energy AMA Supercross season – with his “worst” finish being a 2nd place at Anaheim 1. Every other Main Event has resulted with Ryan Dungey lighting the candles and retaining the Red Plate, including here in Oakland. This weekend also gave way to a second in a row podium appearance for RCH Racing’s Ken Roczen, as well as a first ever 450 podium for the Frenchman, Marvin Musquin. Roczen and Musquin were bar to bar much of the race with some great battling going on.

Other honorable mentions include, privateer/ baller on a budget/ fan-favorite Adam Enticknap, who is currently filling in for the injured Kyle Chisholm on the Rocky Mountain ATV/MC Racing Team. The 7deucedeuce sent his CRF 450 into his first Main Event of the year. The other would be Jake Weimer, who was recently signed by RCH Racing as their third 450 rider as well as a fill-in rider while Broc Tickle is sidelined due to a broken wrist. After a tremendously scary and certainly almost a career-ending crash last year, Jake has made an impressive return to Supercross – finishing the night aboard his new Suzuki ride in 8th overall.

Join me next week as I bring you another “Fan’s Eye View” look into Supercross. From here we head back down south to San Diego’s Petco Park for Military Appreciation Night. Tickets are still available at www.supercrosslive.com.

I’ll see you at the races!