In Oakland, I caught up with Jordan Troxell, the man behind the race steeds of the #13, Jessy Nelson, to chat about the role of a pro mechanic. The bond between wrench and rider is one built on trust, commitment, synergy, and respect – a truly symbiotic relationship and an integral part of every successful rider’s program. To land a “Supporter Spotlight” segment means you’re one of the guys busting your butt day in and day out, all with little glory and acknowledgement in the limelight, just to make the Night Show something worth watching. With years of hard work, dedication, and wrenching under his belt, Jordan Troxell certainly fits the bill of a supporter who deserves his time in the spotlight. Jordan is one of the hardest working guys I’ve ever met and the support he gives to not only his rider, but the entire Try Lee Designs/ Red Bull/ KTM team shows his dedication to hard work and doing all he can to get his riders on the box at as many races as possible. 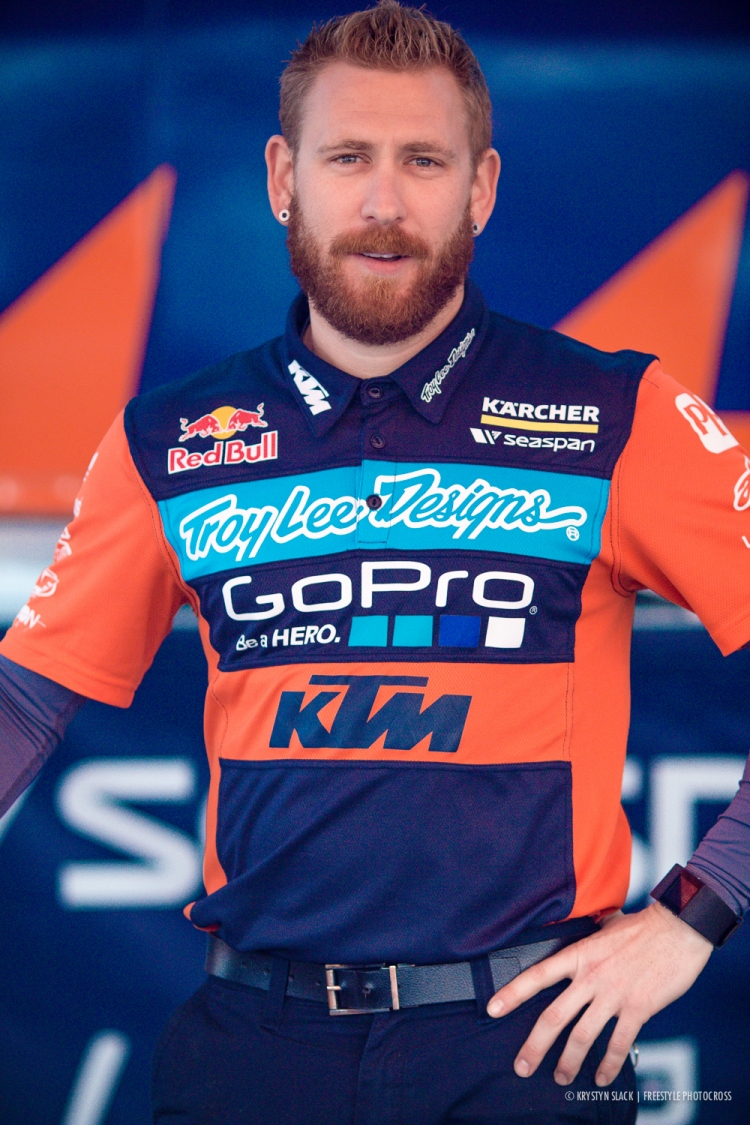 How long have you been working as a pro mechanic?

My first pro season was 2010, as far as the pro circuit with privateers. I had some smaller privateer teams out of Vegas I started with and then worked into here, so this will be my sixth season on the pro side.

Who else have you wrenched for in the past?

Like amateurs and everything? Some of the amateur kids I worked with, uh Ronnie Goodwin out of Vegas and Landon Currier back when he was a Red Bull Yamaha kid. Then I went with Ronnie again when he turned pro and then did a short stint with Kyle Partridge for a bit. Then Lance Vincent in 2011 for his East Coast season and then I moved over to TLD and worked for Geiger and some of Nelson’s amateur stuff. After that it was Christian Craig, then he got hurt and Malcolm Stewart filled in for him and I did outdoor season with him. Then I got Shane McElrath and then back to Jessy Nelson.

You’re an integral part of any rider’s program, so you spend a considerable amount of time, I’m sure, with your riders. How many hours a week would you say you work with Jessy?

Working with Jessy, I’m his practice mechanic as well, so pre season and even in season, we ride at least 3… pre-season we ride 4 days a week. So, he gets probably about 4 hours a day at the track with him, I’m there and just kind of work with him and his trainer and the program and the laps and everything like that. So, yeah, I get my fair share of time with him.

That’s good that you have such a good working relationship with him then. How often are you building and rebuilding race bikes during the week? Does your setup change depending on what the track map looks like?

Generally setting doesn’t change vs. the track map. Outdoor bike is a little bit different than Supercross bikes, but that’s just suspension and geometry chassis settings. We build the race bike every week. Every round it comes apart. Outdoors, it’s done on the road on the truck in the hotel parking lot. That’s average a 10-12 hour day for me. And that’s everything completely torn down to the frame and washed clean and inspected, replaced, and put back together. Same thing happens during Supercross. West Coast, we go back to the shop to do it. Shop builds tend to take a little bit longer because there is more distractions, there is more riff raff, there is more space to walk to wash and build everything. But yeah, a good build for me, top to bottom, would be like 10-12 hours.

How did you get started as a pro wrench?

Wrenching, I just kind of grew up racing as a kid in Virginia for most of a decade. Just kind of a passion I had. And I went to college and that wasn’t for me, so then I went to the Motorcycle Mechanics Institute in Orlando with the dream of making it to one of these tents one day. I just, I knew that’s where I wanted to be so I didn’t quit; I didn’t go to a dealership when I got out. I just… I actually waited like three months before I got a job working with a rider and a family that I felt was a good fit for me and a good place to network myself.

Having a background in racing first, before wrenching, do you still get a chance to ride during the season?

I do ride a couple times a year, but really two or three times as year at most. I don’t know, it’s just, it’s not that I don’t enjoy riding, it’s just I’ve found hobbies to satisfy me outside of the sport now.

When you happen to have a rider injured, like in this instance with Jessy out, in what ways do you continue to support the team?

Man it sucks when you’ve got a guy out, but there’s a lot of guys that go through that and it’s just part of the sport. Like, with him (Jessy) just kind of getting injured or whatever, I go through all of his bikes and comb through them and rebuild them and make sure they’re all 100% ready to go for whenever he’s ready to come back. And then, as soon as that’s done I focus my attention on the rest of the team and just helping the other guys out, pick up the slack. We work a lot of hours. So, you know, if I can arrange something where I can go to the track with Mitchell (Oldenburg) or something so that Sean can build his race bike or Sean can have a day off or something like that when we’re traveling. Then I, I’ll just try to pitch in and do the things that I would like help with when I’m busy.

What would you say your biggest accomplishment is thus far?

Racing-wise? It’s got to be our win at Anaheim last year. That was just…. Especially Anaheim 1, and being our first win and kind of coming in with no hype and everything. It was just uh… I don’t think it’s going to be able to beat the feel of the first one, you know?

And finally, my readers want to know, what is your favorite stop in the Supercross series?

Man there could be a lot. I haven’t done East Coast in quite a few years…. Anaheim 1 is always good. I personally I thought the coolest city we went to was Seattle, but it’s no longer on the schedule. If I could pick one East Coast round to go to, it would be Daytona, just because I like Florida. It’s a different race. It’s just a different speedway vibe; it’s just cool.

Thanks so much for giving us the dirt on pro wrench life.

There is not much too it. {jokingly} Sell your soul to the devil and just work your ass off.