Monster Energy AMA Supercross, an FIM World Championship raced into Glendale, AZ this past Saturday and brought with it plenty of excitement. This week, the University of Phoenix Stadium, home of the Arizona Cardinals, played host to Round 4 of Monster Energy Supercross. Of all the places we visit during the season, Cardinals Stadium is one of the most unique stadiums on the schedule. Fun Fact: the entire grass field is actually grown an maintained outside of the stadium itself and is rolled in on game days. Now, I’m not sure if this has an effect on the actual racing, but I’m going to bet that the venue is pretty stoked that their beautiful grass field isn’t covered in plywood and 500 truckloads of Supercross dirt.

Now, if you’ve been keeping up with the Monster Energy Supercross season thus far, you know that the series has undergone changes to the racing format as well as to the points structure. The change in the points structure was developed in order to keep competition closer throughout the entire season and to prevent a total derailment of a championship hunt merely because of one off night. Thus far, the new points strategy seems to be accomplishing the “keep the competition close” goal. Four rounds in and we’ve had three different points leaders, a points tie, and three unique winners in the 250SX class. In the 450SX class, we’ve also had three different winners and two points leaders.

Aaron Plessinger Takes the Checkers in the 250 SX Class

Upon arriving in Glendale, Shane McElrath and Joey Savatgy donned dual red plates as they were tied for the points lead. The evening of racing kicked off with Shane McElrath and Aaron Plessinger winning their Heat Races. Joey Savatgy found himself in a less than ideal position when he crashed in the whoops during his Heat Race. He would regroup and come out swinging in the LCQ where he would take an easy win – and slim picking when it came to gate pick in the Main Event. A terrible gate pick is no match for Savatgy, however. He pulled a trick holeshot from the far outside gate, a la RJ Hampshire at the 2017 US MXGP. Savatgy would lead the first lap before being passed by Shane McElrath and would ultimately finish 4th on the night. Aaron Plessinger emerged victorious, claiming his second victory of the season, after passing Shane McElrath during the middle of the 250SX Main Event.

Eli Tomac Wins Second Race in a Row in Arizona

Last season, Eli Tomac had his first taste of victory in 2017 on Arizona soil. He would go on to win and almost unprecedented 9 races last year, but just miss out on his first Monster Energy Supercross championship. This season has been off to a rocky start for the Monster Energy Kawasaki rider, but momentum appears to be picking up, and with the new points system, his shoulder injury that caused him to miss two races might not be as devastating to his championship hopes as in previous seasons, especially considering Marvin Musquin and Dean Wilson have also been plagued by shoulder injuries. This week, Tomac got off to a rocket start with a clear track in front of him – a real “danger zone” for his competitors considering his speed is often unmatched. Behind him, the battle unfolded for the remaining podium positions. Justin Barcia found some missing puzzle pieces in the off-season and has really started to connect the dots in his racing, making him one of the most consistent competitors this season. He was closing the gap on Eli Tomac throughout the Main Event and earned himself a second place finish in Glendale – his third podium finish of the season. Just behind him was Ken Roczen, who found himself on the podium for the second time this season. While it may have been a slightly “off” Main Event for the current points leader, Jason Anderson, he still finished in 4th and maintains the points lead as we head to Oakland this weekend.

The championship hunt of the 2018 Monster Energy Supercross season is just starting to unfold in both classes and it’s guaranteed to get more exciting with each lap logged. Here’s a look at fifty of the best photos from Round 4. 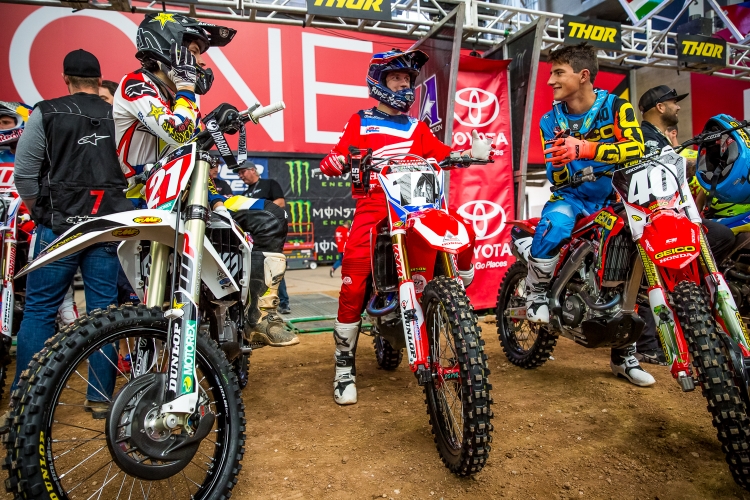