Can you believe that we’re already five rounds into the Monster Energy AMA Supercross, an FIM World Championship season? This is one of those seasons that going into it, I (like so many others) honestly thought that this championship season might actually turn out to be quite, dare I say, boring? There were really only two riders who people had pegged as potential championship contenders in the 450 class – Eli Tomac and Marvin Musquin. Ironically, after shoulder injuries plagued both Tomac and Musquin right out the gate, the battle for the championship was instantly shaken up.

Oakland SX was a race for the books. Not only was it the most exciting race of the season thus far, but easily one of the gnarliest tracks in at least the last decade. The track broke down into race lines that were out to buck riders all over the place, and many of them right off the track. Tiny mistakes on the soft Oakland dirt had near catastrophic results. This race was not only a race against the other riders, but a race against the track.

In the 250 class, the #26 of Alex Martin finally made his return after healing up from a fractured collar bone that he sustained during the season opener. Alex was off to a good start and even led a couple of laps before getting shuffled back to 5th. In a most surprising turn of events, Aaron Plessinger found his way to the front of the pack. Normally, this wouldn’t come as much of a shock to the fans or other riders, but Saturday night, AP was incredibly sick with the flu. To be able to find that inner strength to not only finish a 15 minute + 1 lap Main Event while feeling like absolute garbage, but to win it is spectacular. He left it all on the track to claim the top step, and his third win of the season. Joey Savatgy crossed the line second with reigning champion, Justin Hill coming in third. It was great to see Hill find his stride and finally land back on the box after a tumultuous start to his season.

The 450 Main Event was equally as spectacular. As the track continued to break down, it became even more important for riders to stay focused and hit their marks – only their “marks” disappeared every lap. One tiny mistake was the difference between winning and landing off the podium for many riders. Cole Seely was leading the Main Event for about half of the race before a small tip over allowed him to get shuffled back to 6th place. As riders made small mistakes that changed the fate of their evening a battle was brewing between the #21 of Jason Anderson and the #94 of Ken Roczen. Jason Anderson has really increased his racer IQ this season, becoming much more calculated and patient in his passing moves. It would ultimately be Jason Anderson who snuck passed Ken Roczen with only two turns to go to claim the checkers.

Each week the season gets more and more exciting and if you’re not watching yet, you definitely should join us on this adventure. Here is the “Nifty Fifty” from Oakland. 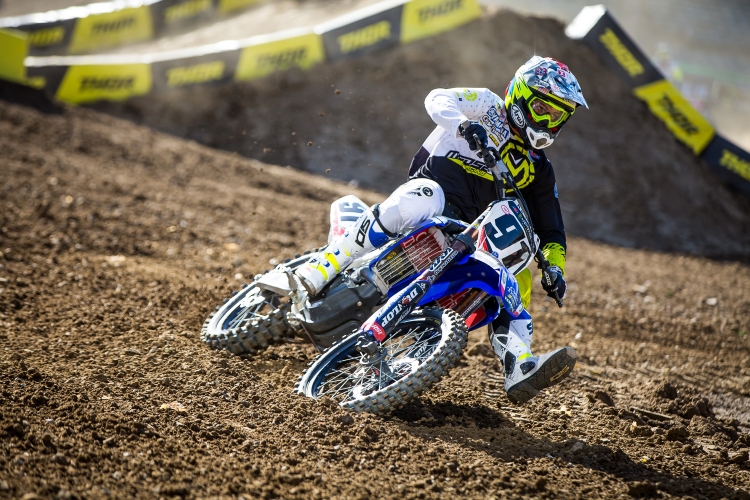